Wow! Running around in ArcheAge Alpha, I stumbled upon something that made me jump up and down in excitement!

Trion Creates a Labor of Love

Trion has always been pioneering in gaming innovation, partnering with XLGAMES for ArcheAge being one of these fore-thinking developments. Today, if I am correct, I think something happened I have never seen in any game and it is just superb because it involves bots and I absolutely despise bots – bots being the online term for robot or any software application that runs automated tasks. Here’s what happened: 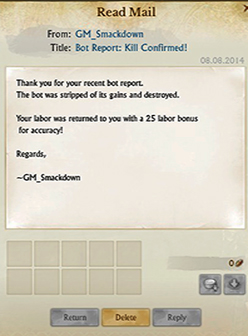 Continuing on my Friday routine looking for ore and watching the Trion Twitch stream, I stop at my mailbox and get a letter (previewed right) followed by another 15 minutes later.

WOW! Trion did it! They made something fun out of Labor Points that I had hoped for in an earlier article. I received the 25 Labor Points back for reporting the bots plus an extra 25 Labor Points with confirmation that the account was banned! Have you ever heard of such a thing?

Bot spamming in Alpha exploded almost 4 weeks ago, surprising many of us. Bots before a game even goes live? Trion got on top of that pretty smartly in time for closed beta. However, being on Alpha quite often I was curious if Trion would be able to keep up because the bots and bot spamming is ruthless. This latest invention with confirmation gives us more reasons to hope for justice on a whole new level to the point where a Bounty Bot Hunter would be sexier than a Pirate giving the imagination a whole new game to play within a game. 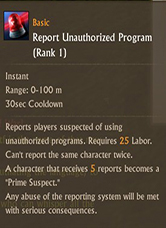 How to Report a Bot

Put that Report Unauthorized Program skill (previewed above) on your hot bar. It can be found under Skills > Basic > Left Column. It’s time to hunt bots!

Looking forward to the success of this transparent gaming innovation and its development! Congratulations and kudos, Trion!