Hey there, Junkies! Vitality here, coming to you with the fruits of this week’s ArcheAge challenge. I have been tasked to search out a quick way to crush the first ten levels of ArcheAge‘s western (Human) continent while keeping the gold gained per minute as high as possible to facilitate that all-important day one land grab.

Let’s jump right in to some basic preparation tips you should aim for before starting: 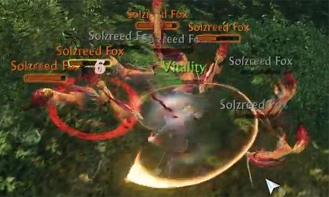 These foxes are a straight up gold mine at this range– legitimately unbeatable when compared to all the other starter zones.

Immediately off to the right side of the initial starting point of the Nui zone you’ll see our beloved foxes.

Battlerage characters have a huge advantage here as they’re able to do a frontal cone AoE on the third strike of their starter ability (Triple Slash). This cone-like finisher attack can be hard to get the hang of because it seems like the AoE damage is allocated locally in relation to your target. This might be a little buggy.

Tab target/click through all the foes and launch an arrow to each one. Pull up to 8 foxes, but be sure not to go over the 8 fox maximum or they’ll trigger a Gathering buff which will reduce the damage they take by 80%.

Bunch them up and go to town with Triple Slash. You can hold the key and the game will repeat the action so you don’t blast your hand right out of the gate. Take advantage of the game’s auto-target nearest feature too with this.

If you kill a certain amount of enemies in a given area they’ll repopulate quicker, so we focus our efforts on one particular spot of 8 foxes in sets of four to set up a cyclical pulling structure. +Efficiency, bro!

Do back to back pulls until your mana runs low then loot all the coin purses. Typically non XP-gaining functions like looting or UI adjustments etc. should be done during this low-mana downtime period. This includes opening coin purses too as you’ll need at least 65 silver by the time you’re done.

Estimated time to get from levels 1-7 and average 75 coin purses (~1.5 gold): 20-25 minutes depending on local player density 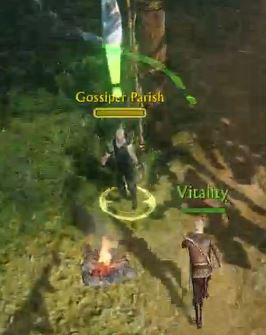 Alright pro, right about this time you should be the richest person on the server, netting somewhere in the 1.5 – 2 gold range. Don’t let that go to your head– wealth’s not all about gold these days. Let’s hit the story quests on the way out of fox paradise.

Story quests are most easily recognizable by their green exclamation point as opposed to the yellow ones scattered everywhere. The importance here is that they reward you with Gilda Stars. You’re going to need as many Gilda Stars as you can get your hands on come day one. They’re the base currency for purchasing property and other similar amenities (among many other uses).

We’d be crazy to pass up early opportunities at easy Gilda Stars, especially considering the story quests in this area are just straight up pathetically fast and easy.

Since you simply need to pick up the green quests and talk to the next person down the road, I won’t bother going into too much detail for these. However when you get to Bluemist Forest you’ll have one portion of the quest which will require you to activate an item in front of the NPC. You can just click the item on your quest tracker and move on down the road. Pretty standard fare.

Smash your way through the green quests and speed barrels all the way to Wardton. You should be about 50% into level 7 at this point. After completing the story quest in Wardton you’ll notice the next quest objective (noted on your map as a green circle) is way the hell in the southeast. Yeah, right. Let’s save that for later.

Make your way to the Weapon Merchant in town which is fairly close to the last story quest turn-in. Pick up a level 7 two-handed weapon. This will cut the TTK of the bees you passed straight up in half. 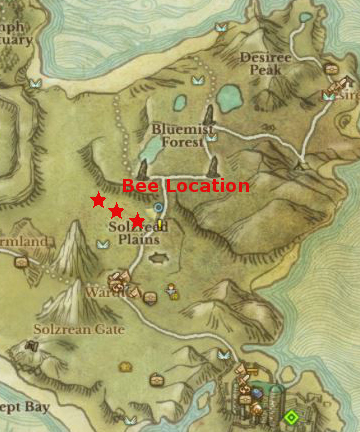 Now, make your way north of Wardton to the small bee forest along the road (located marked on map to the left). Take note though, these guys aren’t as easy as the foxes. You’ll have to take your time here getting into a rotation and you won’t really be able to AoE farm these.

Typically these bees will go down in two auto attacks and two Triple Slashes. So don’t blast mana on Charge or anything else because this will decrease the number of bees you kill per downtime period significantly.

Murder these bees until level 10.

Alright, man. You made me kill bees for 30 minutes straight. Now what?

Bust your butt west to Lilyut Hills: Windshade. Hit the book in town and bind yourself there. The run should take about 6 minutes. West of the fork in the road at Windshade you’ll see a public farm. There’s a Farmer NPC there with a green plant over his head. This is the start of the small Farm quest chain. You’ll have to gather water at the well nearby and water some corn, buy a potato eye from the seed vendor, and plant it. You’ll then have to run to the Auction House vendor to the west and back. Presto! You now have access to small farm designs, wood, and tax certificates.

After you get your small farm, the same guy will send you up north to talk to another NPC to show you how to plant your farm down on the land. Don’t bother with that just yet. Instead, let’s go grab some choice land!

My personal choice land is on the northern coast of Two Crowns at Moonswept Homes. This spot gives you ideal boat access and a great crafting town with easy trade pack setups. The run takes about 20 minutes from the small farm quest if you aren’t lucky enough to catch any trams. 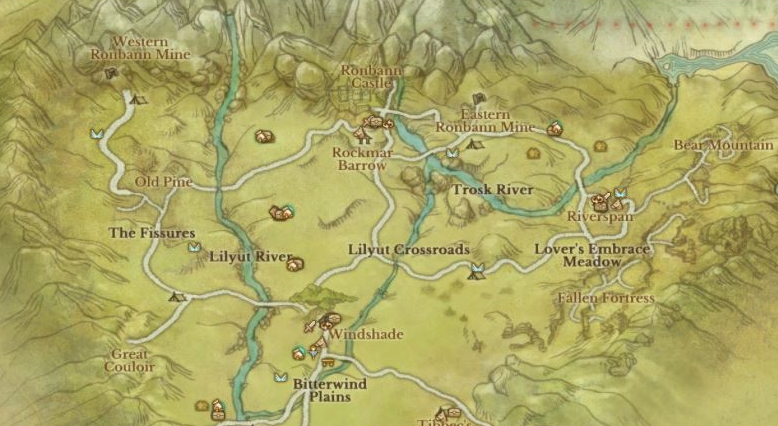 Cut south through Dewstone plains, down the eastern coast, and cut across the southern water channel. Make sure to stick to the right-hand side cliff because there are some pretty aggressive mobs out in the water. The mermaids off to the right are neutral. Head east across the beach until you get to Moonswept Homes. Make sure you dip into the town to get the teleport waypoint logged into your book. Then head north to the beach and find a nice spot for your farm. If it’s day one, you should be one of the first people there.

Before you head out!

Pop some geese, beans and, strawberries down on your completed small farm. You’ll need these for the large farm quest. Geese straight up take 6 hours to mature, so get them down early and be sure to only pluck the feathers and not butcher them instead!

Now run off, master of farms, the world is yours!

Be sure to head  over to my Twitch.tv channel to view the VOD  demonstrating this guide!

If you liked this guide or have any questions or suggestions for an article you’d like to see in the future please be sure to leave a comment below!