Trade runs are an integral part of ArcheAge– driving the economy, providing unique materials, and encouraging small and medium scale PvP. Whether youā€™re a farmer, a crafter, or a pirate, trade packs and the potentially perilous paths their carriers traverse help shape your game.

At its heart, a trade run is exactly what it sounds like: Making and moving unique goods across the world. Supply and demand affect payouts, and the riskier the route, the higher the rewards. Each zone of the Nuia and Haranya continents has specialty goods that can be crafted at aĀ regional specialty workbench, and most zones have special traders ready to take those goods off your hands. The only requirement is to trade the goods in a zone other than where they were made. How far you travel is up to you. 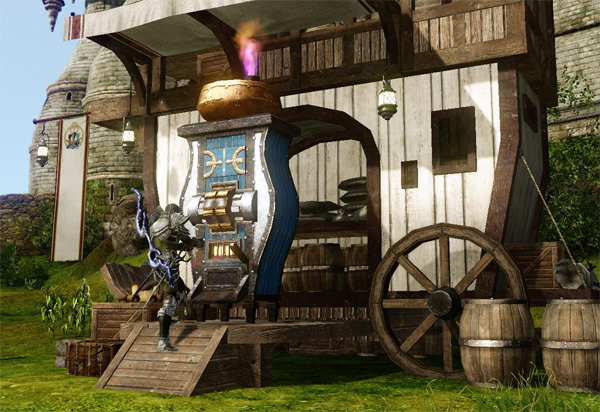 Looking at the payout for your trade run may seem like putting the farm cart before your donkey, but because they vary so significantly, planning ahead for what you want to gain is necessary; that choice determines what youā€™ll be making, where to craft, and where youā€™re headed. Your first decision is what traders you want to deal withā€¦ are you looking for gold, gilda stars or crafting materials/stabilizers?

Most zones have a Gold Trader NPC that will take your trade pack from another zone. Gold Traders deal in domestic goods, meaning they will only accept packs made on the same continent. For some reason these elitist NPCs donā€™t want goods from across the pond, so donā€™t even try to pass Nuia goods off on Haranya Gold Traders.

Of the three traders, though, theyā€™re the only ones interested in domestic goods. That makes for considerably safer routes for trade runners looking to avoid significant, or even any conflict byĀ staying in protected or peaceful zones. As the safest option for trade runs, dealing with Gold Traders is the least lucrative of the three, but it can fund whatever craziness youā€™re up to in ArcheAge.

Gilda stars are a unique currency accepted on Mirage Isle to purchase a myriad of itemsā€¦ from warships and homes to cow mounts. While some items can be traded after theyā€™re purchased with gilda stars ā€“ not the cow mount! ā€“ the currency is bound to the player that earns it. There are several dailies that will reward gilda stars (guide coming soon), but trade runs remain an efficient and fun way to acquire them.

Gilda Star Traders are only interested in foreign goods: Specialty packs made in a zone across the ocean. If, after making your specialty trade pack, youā€™re willing to brave the sea, Gilda Star Traders will gladly pay you in gilda stars so you can, in turn, shop the Mirage Mall to your heartā€™s content. They tend to be near a port, meaning there wonā€™t be a whole lot of ground travel once youā€™ve crossed the sea.

Like Gilda Star Traders, Resource Traders only deal in overseas goods. Where you find one youā€™ll find the other, but selling to a Resource Trader will reward one of the unique crafting stabilizers that can only be earned through trade runs: Charcoal Stabilizers, Rock Salt Stabilizers, Crystal Stabilizers, and Dragon Essence Stabilizers. Cross the sea with a trade pack and visit the following locations:

Tycoon Tip: While trade runs are the only way to earn these stabilizers initially, they are not bound and can be sold to other players. If you keep an eye on their value, selling the stabilizers you earn from an overseas trade with a Resource Trader can net you significantly more gold than dealing domestically with a Gold Trader. 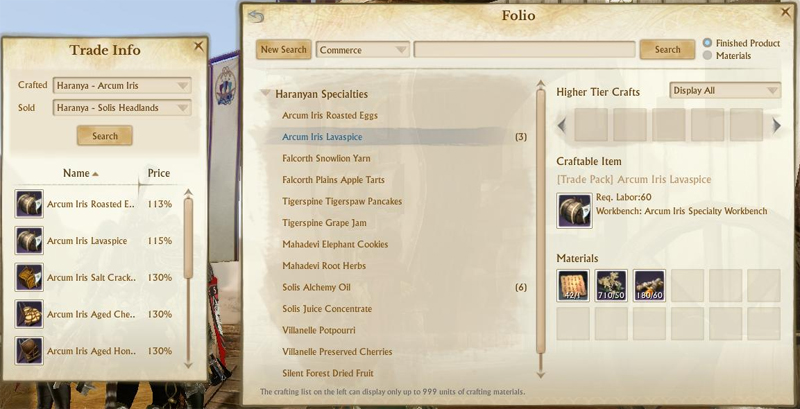 There is aĀ mechanic in-game that lowers the value of trade packs if a particularĀ specialty item is flooding a zone. Fortunately the current trade rate is accessible and updated in real time on the Trade Info tool (click the scythe in the mini menu). SelectĀ the crafted and potential sale locations for the going rate – max is 130% – and choose which pack to make or consider other delivery options. 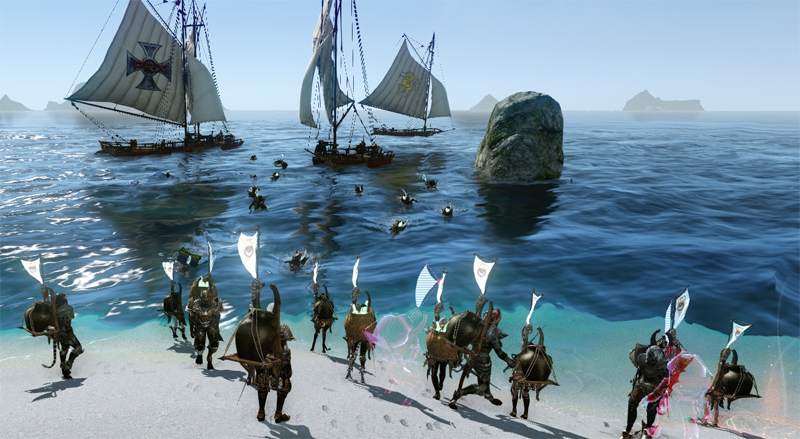 To understand the risk of trade runs consider this: 20% of the reward for all packs turned in will be mailed to the creator of the pack, the other 80% to the player that actually turns it in. So maybe you take it from start to finish for 100%, or maybe you make a pack and hand it to a friend so they can get a few gilda stars… or maybe a shipĀ full of scurvy individuals kills you on the sea, strapsĀ on a pair of Baktehan’s Swimfins, and swims down from your lifeless body to pick up yourĀ tradeĀ pack from the bottom of the ocean for 80% of what would have been your Dragon Essence Stabilizers. Welcome to ArcheAge!

Because of the significant reward for turning in a pack someone else made, pirating or PvPing for packs is a viable strategy for acquiring them. Trade packs will give you the Overburdened “buff” which reduces your movement speed and prevents teleporting or gliding. And, like all packs, if placed or dropped on the ground, they become free loot for whoever grabs them first, and dying means dropping the pack. Both sea routes and turn in locations can be perilous. Bring a friend. Or eight. 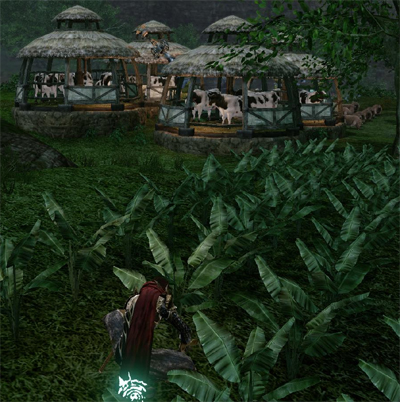 Now that you have an idea of the risk and particular rewards of trade packs, it’s finally time to make the trade run. Utilize your Folio (O is the default keybind) to know the materials to grow/gather/buy for your chosen trade routes, and visit a General Merchant to purchase Quality Certificates; you’ll need one for each trade pack you create.Ā Then cozy onĀ up to your preferredĀ specialty crafting bench and make theĀ trade pack. This will immediately put it on your back, slowing your character.

You won’t be doing much actual running with a trade pack on, but there are several options for moving the packs. Walking… I wouldn’t recommend.

Most mounts are useless with the added weight of a trade pack, being slowed to 1.7m/s. Donkeys, however, are able to maintain a base speed of 4m/s with a trade pack. They also have a unique speed boost skill at level 20, a 30% increase for 1 minute at the cost of a carrot. The player receives a donkey foal as a quest reward for the second trade run quest that begins in Windshade (Nuia) or Anvilton (Haranya), and they can be purchased on Mirage Isle for 5 gilda stars.

Farm carts and farm wagons are particularly useful in trade runs. These vehicles have two and four storage crates for trade packs, respectively.Ā Both have a base speed of 4m/s, the same as a donkey, but are a bit slower once the donkey gets speed boosts from armor. That is until the driver of the farm vehicle uses an Eco-Friendly Fuel for a 50% speed boost for 8 minutes. The biggest benefit, however, is the multiplicative value of the storage crates.

When placing a trade pack in a storage crate, only other members of the owner’s party or raid can remove them. If the vehicleĀ is desummoned or destroyed they will drop to the ground and become free loot, but short of that happening you can safely transport trade packs in the crates as well as carry one on your back while driving. The donkey can handle rougher terrain, but a farm cart arrives with 3 or 5 packs to the donkey rider’s 1. The bottleneck for building the farm cart is a Thunderstruck Log, but if you want to take advantage of trade runs that’s a log well spent. Farm wagons require materials only available on Auroria, so they are not yet in game. 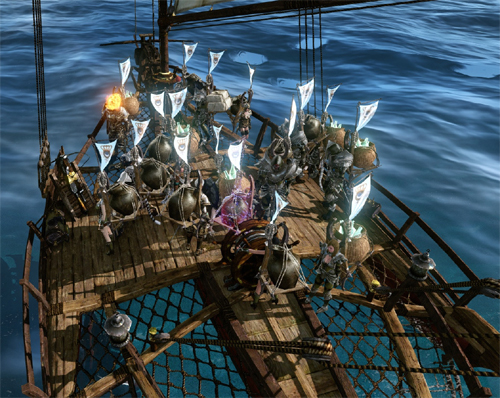 Like walking, swimming works for crossing the ocean but I wouldn’t recommend it. Clippers are fantastic ships for their speed, but without storage crates youĀ are limited to what’s on your back and burdened with theĀ Overburdened debuffĀ at all times. Galleons (Lutesong Junk and Eznan Cutter) do have 4 storage crates, but they’re fairlyĀ slow for a trade run. Merchant ships are ideal, equipped with 20 storage crates, so grab some friends for defense and everybody move a few packs. Just keep an eye on radar, and have at least 15Ā Eco-Friendly Fuel handy for its speed boost, a 10% increase for 10 minutes.

Now that you’ve made it to an NPC with a trade pack on your back (regardless of who made it… I’m not judging!), turning it in starts the 22 hour countdown for your reward. You’ll be mailed the gold, gilda stars or stabilizers– 100% of the reward if you crafted the pack or 80% if you came across it by other means.

Whether you hit up the auction house or farm the materials needed, or just farm other players running trade packs, I hope this guide has been helpful. Post any questions you still have below.