This is the first of a series of guides that will look at one of my favorite aspects of ArcheAge: naval warfare. We’ll start by getting some general tips out there for those of you who want to learn more about and be more effective on the sea. The next guide will look closely at tools and weapons of ships, followed by one on player gear that can enhance your seafaring experience. Then we’ll wrap it up with a few that will help you get to know the various ships on the seas and what’s available to players to own and captain (and plunder).

Gliders and Turbulence, or: How to Spot the Newb

I’m putting this at the top because if you take nothing else away from this guide, remember this: Don’t use your glider on the sea. If you can avoid that habit, at the very least you won’t embarrass yourself. Pretty much everywhere on the sea and on the smaller islands, like Growlgate and Freedich, players will receive the Rough Sea Winds debuff. When it says it can be “difficult to maneuver a glider” what it actually means is that you’ll very likely end up underwater, upside-down, and 15 meters in a direction other than you intended.

It seems a natural way to board another ship, and for those of us that played early alpha, before the introduction of turbulence, trust me– we loved it. I got so used to it I am occasionally the newb out of habit. If you’re lucky, you’ll just fly slower… slow enough that people beneath you will be swimming (and snickering) faster than you. But most of the time you’ll spiral out of control and be late to the party or, worse, left treading water.

Floater Tip: Ryan recently posted about double tapping jump to deploy your glider. Good call, but be sure you don’t remove it from your toolbar. Keeping the Use Glider skill (found under Skills -> Basic) or glider there will allow you to deploy it if you are floating at the top of the water. Double tapping jump will not. This is helpful when you’re close enough to land that the Rough Sea Winds debuff does not apply.

Seems like a no brainer, right? All ships have a ramp to the rear you can walk up. The fishing boat, galleons and merchant ship also have ladders along the side. Well, here’s an important tip to keep in mind: Whether it’s the ramp or the ladder, the initial interact button (default F) will cause your character to grab and hold on to the ship. If you are in the habit of doing this, your pilot shouldn’t have to slow down or stop to pick you up. Be ready to grab on as the ladder or ramp floats by.

Sails and Speed and Turning

Each of the ships, with the exception of the fishing boat, rely on sails, and these can be interacted with by a player to change the speed and turning rate of a ship. When sails are hoisted (unfurled to catch the wind) the ship will move forward at full speed but turn somewhat slower. If the sails are furled, the ship will move forward more slowly but the turn rate will be significantly improved.

Details for all ships will be covered in their guides soon, but as an example: the clipper’s move speed is 11.1 m/s with sails hoisted but its turn speed is only 14.8 degrees/s. Furl the sails and you are slowed to 9.1 m/s, but turning shoots up to 19.8 degrees/s. The difference becomes even more pronounced on the larger ships, and you’ll find it worthwhile to have someone assigned to sails for quick maneuvering.

Sails can be furled or hoisted from the masts, and if a ship has multiple sails each is controlled separately. The action takes 1.5 seconds with a 5 second cooldown until the sail can be manipulated again.

A storm can also affect the speed of your ship. These are low-lying clouds that you’ll see lightning in from a distance and rain when you’re in them. More importantly, when you’re in a storm movement speed is reduced for all players, mounts and ships. There doesn’t seem to be an exact global modifier as different types of ships are slowed to a different degree (i.e., clippers lose approximately 22% speed, galleons 16%), but the debuff is significant and these should be avoided.

When piloting a vessel, the same movement keys that work for your character work for the ship. Forward is forward, back is back, turn left and right do the same, and auto-run will keep the ship moving. The ship will slow to a complete stop if the wheel is released.

Frustrating, though, is that strafe does not work to turn your ship, only turn character does. Like most gamers, I don’t waste two keybinds on turning, an action done considerably more efficiently with a mouse, but in ArcheAge I have to. My middle ground solution has been to bind Shift+A and Shift+D as turn keys for short trips at the helm. If I’m going to be getting into all sorts of shenanigans on the sea for a while, I’ll change my A and D binds from strafe to turn. YMMV.

While some ship types have unique skills, which we’ll look at more closely in later guides, there are three buffs that all offer for the captain’s management. The buttons for each will appear on the ship’s toolbar for whoever is at the helm.

This 90 second buff is placed on the ship whenever the ship is initially summoned or the ability is selected. Owner’s Mark prevents anyone but the owner of the ship from taking control of the helm. Anyone can board, grab items, and interact with cannons or radar, but only the ship’s owner can control the ship’s movement while the buff is active. If you’re not the owner of the ship but you are piloting, activating this buff will not kick you off the wheel, though you won’t be able to take it back if you let go, at least until the buff ends. There’s no cooldown, so if a fight is going awry it’s worth refreshing often to delay an enemy from taking control.

This is a player buff granted by the ship, significantly increasing the evasion ability of the helmsperson. It doesn’t make you immune, but the pilot is often the main targeted person to stop the ship’s movement by pulling them off, so this boost to evading attacks from other players (or seabugs) should always be running. Fortunately it has no strict duration, lasting until you release or are removed from the wheel, so making it a habit to get the buff running every time you take the helm will serve you well.

This speed boost increases the move speed of the ship for 10 minutes at the cost of 15 Eco-Friendly Fuels. The reagents for Forewind are not trivial to obtain, but they are certainly easier than what was needed in alpha. It’s a good shift, making it something a captain can keep on hand for when some extra speed is needed, whether it’s to deliver some trade packs that much faster or to be that much faster to interrupt another’s delivery of trade packs. Forewind is on the ship itself so letting go of the helm does not cancel the buff. Ships running this buff will be recognized by an increased amount of spray at the bow (front) of the ship. 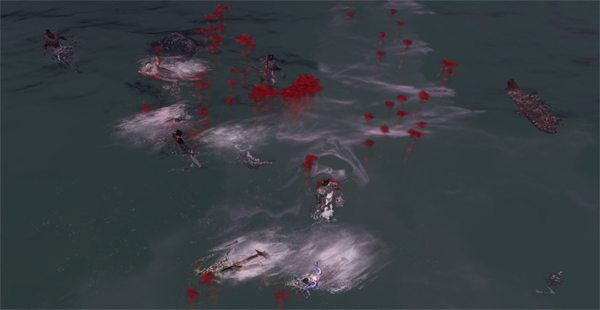 The Perils of the Sea

I wouldn’t be doing you any favors if I neglected to mention that there is no forced peace on the sea. Once you have sailed out of a land’s boundaries, all sea zones are in one of two stages: In Conflict or War. There is never a cycle of peace, never a time where it is safe to traverse the ocean. This is what makes ArcheAge’s naval warfare a constant investment of risk and reward, attested to by the bloodstains and ship remains in the above image.

As I stated in my trade run guide, the best rewards to be had are from intercontinental deliveries. Come brave the seas. Let the trolls stick to blocking trade routes with their farm carts in zones where they have no fear of being attacked. To those of us who came to play: I’ll look for your sails on the horizon. And if you want to know more about how to develop those sea legs, stay tuned for the next guide on the tools and weapons of ships. 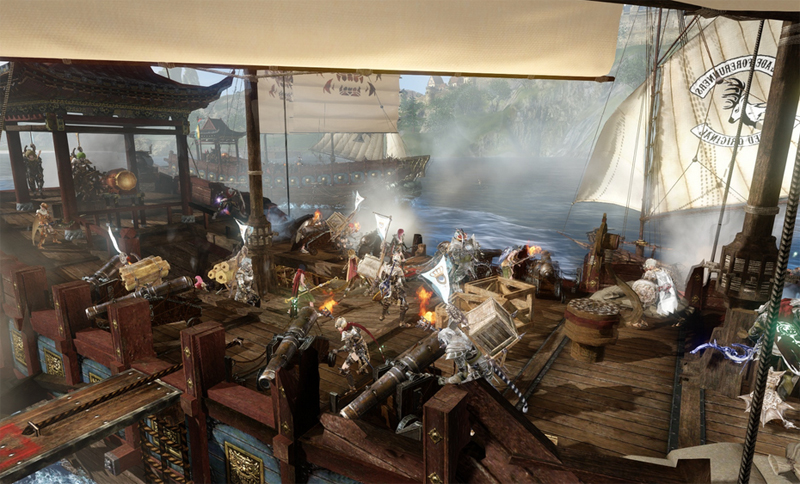 The post ArcheAge: A Guide to Naval Warfare – Introduction appeared first on JunkiesNation.