Welcome back to round 2 of guides on naval warfare in ArcheAge. So you’ve read through the initial guide and want more, eh? Think you’re ready for the sea? Then step aboard – right foot first, please – stay near the grab rails, and hold fast while we look at the tools and weapons on ships.

Later guides in this series will look at each of the ships in detail, but as we discuss the equipment in this guide it’s important you’re able to distinguish one from the other, if only so you can apply what you’ve learned (and don’t find yourself wondering where the cannons are when you board a fishing boat). The picture below (click to bring up a larger version) displays four ships representing the various ones you’ll encounter on the seas. From left to right is a galleon, merchant ship, clipper and fishing boat.

There are two types of galleons, and they look very different from one another, but their size alone should help identify a galleon from the others. They are the tanks of the fleet, where you’ll find more cannons than all the others combined. There is just the one type of merchant ship, a long and slender vessel with two sails. Clippers are smaller and sleek with a single sail and sport a solo cannon or harpoon, the only difference between the two types. Fishing boats are easily distinguishable with the color difference and a paddle wheel in lieu of a sail.

The first bit of equipment we’ll look at is probably the most powerful. Both galleons and the merchant ship are equipped with radar to help identify the locations of other ships… all the better to avoid or run them down, whatever your preference. A player interacts with the device and activates it, starting the radar pinging a large area, providing information on surrounding ships. 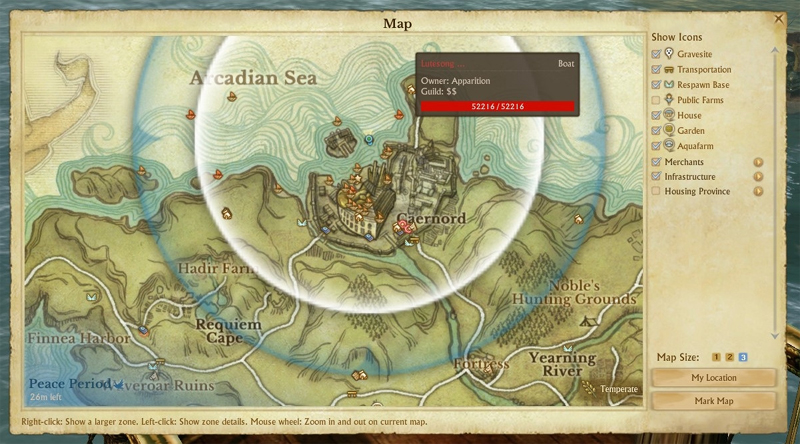 Once the radar is activated, the player’s minimap will include icons of all ships in the area, but much more information is available on the main map, as pictured above. Ships that are orange-ish are enemy faction ships while the tan-ish ships are same faction (not the most distinguishing contrast). When mousing over any of these icons, the map will display further information. The top left will be the name of the ship with the type in the top right (more on that below). “Owner” is the player that owns the vessel and the numbers in the red bar are its hit points. Sadly the guild indicator does not currently work.

Being able to identify a ship properly by the radar is an important skill. Recognizing a ship as an enemy is helpful, but being able to distinguish it as a galleon or a clipper before deciding how to respond is no less beneficial to your captain or raid leader. Here are some tips for the next time you’re on radar:

Same faction doesn’t mean friendly, but opposing faction is even more likely to be an enemy. Note that a ship’s name will be colored according to its faction if the tan and orange icon colors don’t distinguish it clearly enough for you. The above two ships are friendly/neutral (white lettering) and enemy faction (red lettering).

Ships are also distinguished by type to the right of the ship’s name. In the example above, you’re looking at the abbreviated info on my galleon Elise. While “Boat” may not seem much of a distinction, it is actually a category that someone on radar should take note of. Here is the breakdown so you can accurately relay what ships are on radar, and avoid falling into the cliché, but sometimes effective trap of an eight cannon beast galleon carrying 40 people named “Rowboat”.

Another awkward detail… I’m not sure why “Boat” covers such a broad range of ships. Most likely your responses to seeing a merchant ship or galleon will be very different, so it’s important to identify one from the other. Fortunately you can with a quick extra step: checking the ship’s hit points. Merchant ships have 42,216 while galleons have 52,216. Keep that in mind if you’re on radar so you can accurately report which “Boat” it is to your shipmates.

With all the information that a radar provides it is a powerful tool, but cannons can be the most devastating. One of the clipper types, the Adventure, has a single cannon starboard (right side while facing forward). The merchant ship has two, one facing off each side. Galleons are equipped with eight total, setting up a deadly broadside with four cannons able to attack from port (left side while facing forward) or starboard.

Aiming and Firing
A cannon’s range is significant, able to fire on an enemy as close as 4m and as far as 120m. They can traverse (move side to side) approximately 60 degrees (+/- 30 degrees). Note that, when aiming, the cannon will animate as you move your target, however firing the cannon does not require the animation to have completed; the cannon will fire based on the player’s target, the direction the animated cannon is facing is purely cosmetic.

To start the bombardment a single player interacts with a cannon, bringing up the Fire Cannon option. Clicking this will produce an arc and target for the player to aim with, changing from blue to red if the target is out of range. Left click then fires the cannon. There is no cooldown save the global, so firing shots rapidly is possible, often ideal. Aiming is smooth and responsive and does require deflection targeting, or leading the target. It takes a little getting used to, and those at the helm of ships targeting and being targeted can maneuver to aid cannons or render them ineffective, but it’s immensely satisfying to fire cannons at ships and players.

The player does need to provide their own cannonballs, or Steel Ammo, but they are easy and inexpensive to come by. As with all crafting, searching in the Folio will show you the details, but as a quick note: 100 Steel Ammo will require 10 Raw Stone, 2 Blue Salt Wedges, 2 Iron Ingots and 7 labor. Take a few minutes to mine for raw materials and there’s no reason you should ever leave port with less than a few hundred in your bags.

Cannon Damage
My guildmates often generously aid me when I need another to test numbers, work out ideas, or prep for a guide. When I asked, “Who wants to shoot me with a cannon?” I got quite a few offers… But the results are what’s important!

Cannon fire landing anywhere on a ship will damage it for 150-200. That may not sound like much, but with the capacity for rapid fire a single cannon can easily destroy a clipper (9,216 hitpoints) unaided in under 3.5 minutes, well below a ship’s despawn timer. Players can attack ships, too, but player abilities don’t hit as hard as cannons will.

Cannons also hit players, anyone within 4m of the impact point. Players will be hit twice by each blast, presumably calculated as one range hit and one melee. They can be blocked, evaded, etc. The damage is physical and is therefore reduced based on the player’s Physical Defense. There is also a small chance – less than 10% in my testing – the player will be tripped when hit by cannon fire, knocking them down for 2 seconds. Keep this in mind when aiming for a ship: spread the wealth among its passengers. And by “wealth”, I mean damage, death, destruction.

When a ship is summoned it will come with backpacks that can be equipped by anyone on board. Depending on what you’re up to on the sea they may or may not be overly helpful, but you should know what they’re capable of.

Underwater Breathing Device
There’s fun to be had under the water as well, and this device will keep you breathing for ten minutes down there. There will be between two and six Underwater Breathing Devices on a ship, depending on her size, and they need to charge for five minutes before use. After charging, packs can be equipped which start your ten minutes of underwater breathing. One minute after the Breathing Device has been equipped by someone, another uncharged device will spawn in its place and be ready to go five minutes later.

Portable Harpoon Cannon
To be blunt, this backpack is not very impressive. When I saw something called a Portable Harpoon Cannon I got excited that it might, you know, act like a harpoon. Sadly it acts much more like a cannon, so no spearfishing a runaway enemy clipper and reeling yourself in. And as a cannon, it’s not overly powerful, one ability about half an average AoE player spell (Harpoon Bomb, 940-1340 ranged, 6m spread) and a second that’s weaker (Deadly Toxin Shot, 500-600 ranged, 7m spread). And just to make it worse: the weaker one requires you to provide ammo that is a pain to get materials for. (Have you ever tried to kill a jellyfish?)

At least the item comes ready to use as soon as the ship is spawned, and a new one will appear one minute after it is picked up, just like the Breathing Device. At best, I’d say let your melee grab one for those fights at range, maybe healers for those rare moments between casts. It’s a wonky weapon, and you can’t even aim it. It just hits the first thing it finds between you and about 45m away (that is until your 15 minutes of fun are up), then it despawns.

Crates aren’t unique to ships, but they get a lot of use on the sea and deserve a reminder section at least. As I discussed in Introduction to Trade Runs: crates offer safe (relatively!) storage for a trade pack, removing the Overburdened debuff and enabling you to be more mobile for whatever fun comes your way. Because if you thought walking was slow with a trade pack on, try swimming.

So take a load off and drop your pack in a storage crate… short of the ship despawning or being destroyed, only members of the ship owner’s party or raid can remove them from the crates once placed there. They’re not a necessity – I’ve carried over 20 people with packs on across the sea on Seabug, my clipper – but storage crates make for a smoother, and better guarded trek.

… four to go in this series of guides on naval warfare in ArcheAge. Next we’ll look at player gear that will enhance your time on the sea, because what fun is swimming to another ship if you can’t do it in flippers? How do you repair these ships anyways? And why bother fighting over who gets the Underwater Breathing Devices when you can have your own permanent one? That and more soon, but in the meantime: happy sailing!

The post ArcheAge: A Guide to Naval Warfare – A Ship’s Tools appeared first on JunkiesNation.