In quite a surprising move, Trion announced late last week that our four new souls that were originally slotted for 3.0– the Arbiter, Liberator, Oracle, and Physician– will be going live in RIFT‘s next major update, which will be 2.7. The team revealed a teeny bit about both the new Warrior soul and the new Cleric soul. The Oracle, which was originally dubbed ‘Crusader’, is a support-based Cleric soul armed with magical spells originating from the Death and the Water planes and is both a fierce ally and a force to be reckoned with. The Liberator is a healing Warrior who excels in raid/group healing and absorption shields.

We’ll find out more info about the other two souls– the Arbiter, the Mage tank, and the Physician, the Rogue healer– in the next couple of days. Trion has already stated that these new souls will be purchasable in a bundle on the RIFT Store, but we don’t know the exact price details yet. We also know that there will be at least two major content updates before 3.0, which means that aspiring Arbiters, Liberators, Oracles, and Physicians will have plenty of time to discover awesome soul setups before the level cap is extended.

While this is all obviously good news, some members of the RIFT community are concerned about balance in regards to the new souls. In most MMORPGs, new talent trees and/or other major class changes are typically done during the launch of a new expansion or right before one. This gives the development team a little time to make adjustments before players begin a new raiding tier. Here, it seems that Trion will be tasked with fixing the majority of balance issues internally or on the PTS. Daglar reassured the community during last Friday’s live stream that internal raid testing is indeed going on behind the scenes to ensure the new souls are as balanced as possible when 2.7 launches.

Oh, and there’s some other good news. If all goes well with the internal QA team, we’ll be receiving the new Steppes of Infinity Conquest map this Wednesday. There is a chunk of PvP-related updates on the PTS currently that point to new Conquest faction-themed capes, new PvP mount re-skins, and a new PvP/PvE source engine/planar focus. For a preview, check out RiftGrate’s.

There are also some pretty big hints on the PTS that point toward another Mech Week promotion headed our way soon. There will be two new achievements this time around: 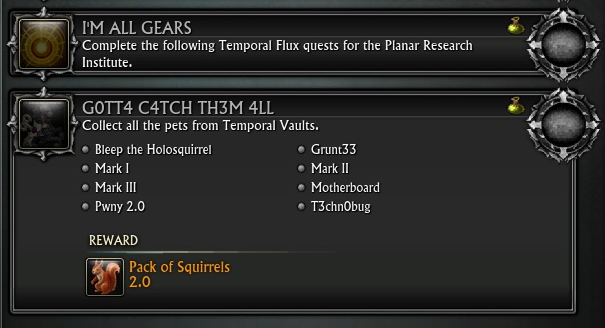 The first achievement is rewarded for completing three quests, which means we’ll be getting a little more to do during this version of Mech Week from the sounds of it. The achievement mirrors the one for taking part in Budgie Week’s races (even down to the reward offered, which is a Temporal Flux Vault), so in all likelihood it will probably be something similar. There’s also, unsurprisingly, a new achievement to collect all of the Mech Week-inspired pets. The reward is a Pack of Squirrels item that summons, well, a pack of squirrels. We’d also wager that our chances of being able to obtain a new Mech mount or two from the new Mech Week are very high.

Speaking of promotion/world events, we found out during Friday’s live stream that the Carnival of the Ascended world event is being extended for one more week! Players will be able to get one final Auroral Doubloon from the weekly quest.