Ah, Fae Yule. It’s always been one of my favorite RIFT holidays. Ever since last year’s addition of the little sledding mini-game and the IAs, it’s always struck me as one Trion’s better world events. There are plenty of things to do, there are plenty of holiday goodies to stumble across in Telara, and there are adorable boglings in Santa hats running around and plenty of things to get drunk on. What’s not to love?

I also have to admit upfront that I’ve been a little harsh lately regarding Trion’s recent cash shop incentive additions to the game. Mech Week and the like were poorly handled in my opinion, as was Autumn Harvest to some degree. Luckily, Trion seems to have taken our feedback to heart and has given us something much better balanced this time around. ‘Tis the season for Fae Yule and for improved holiday events.

As we’ve come to expect recently, this year’s Fae Yule came with an accompanying RIFT Store grab bag/lockbox and a couple of new mounts that were offered as rewards for completing the shop incentive achievements. When the RIFT Store content went live the day before Fae Yule started, many of us grumbled about the new additions being entirely store-centered, but changes were quickly made to the event that made these grab bags much more accessible just by playing RIFT.

As the event continued through its phases, we even found out that each of the new Fae Yule phase quests granted a pair of each of the event’s lockboxes as a reward as well as the new Dark Icicle currency (if you’re having issues with the last phase’s quest, by the way, check out this forum thread). The grab bags also appear fairly often inside the daily Patron bags, which has made logging on each day quite enjoyable, I must say, especially since there are some unique pets inside the Patron bags as well. Most of the pets for the mount achievements are account-bound which makes it a little easier to collect all of the items on one character. 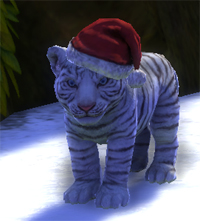 With a little luck and a decent stash of alts and time, it’s even possible to complete the achievements without utilizing the RIFT Store, and that’s exactly how it should be. Sure, it’s extremely RNG-related and may be quite time consuming if new alts have to be made, but if someone wants to go through all the trouble of trying to obtain an achievement by creating a sea of alts, at least they have the option to do so. My day was pretty much complete when I stumbled upon a Snowflake pet a couple days ago, and that’s the excitement of holiday events we’ve sorely needed lately. All players need to experience the excitement of finding holiday-themed goodies without having to pop open a cash shop. All we’ve needed this entire time have been options, and finally, Fae Yule delivered.

The new achievements Trion added in after folks complained about the influx of shop incentive achievements were also fantastic to see. Fae Yule has needed better achievements ever since its introduction, and finally we got some. The collectible achievements with mounts and other goodies as rewards are awesome, but again– options are key. Why, yes, there should be an achievement for knocking over snowmen or picking up odd little candy canes around town, because, well, why not? Half the fun of an achievement system is getting to complete random achievements while doing everyday activities.

Fae Yule has always been one of RIFT‘s better holiday events as far as immersion is concerned. The sheer amount of activities to take part in during the holiday help bring the immersion level to the forefront, but so do the decorations and little goodies that have always been a part of Sanctum/Meridian. Fae Yule isn’t one of those holidays that’s stuffed into an NPC-filled corner of the two faction-based cities. We’ve got snow and trees and presents teetering over and cute little bogling snowmen. We’ve got trees across Telara where we can gather presents from and IAs, sledding, and holiday rifts and zone events to take part in. We even have decorations that change based on the phase of the event (thanks to Atrophinius). It has character, and charm.

The only thing lacking was the fact that the decorations didn’t continue much outside of Sanctum/Meridian. This year, Trion corrected that. Fae Yule is officially everywhere. Tempest Bay, especially, looks rather impressive, and even in the other major parts of Telara we can see little hints of the holiday season. Trion didn’t quite go as overboard as other game developers sometimes do with holiday events and decorations (yes, World of Warcraft, I’m looking at you), but honestly we don’t need RIFT to go overboard with its holidays. We don’t need Fae Yule trees around every bend when meandering through Seratos, but we did need some type of reminder that a celebratory season was upon us.

Holiday events are something to look forward to in MMORPGs because of the change and immersion they tend to bring to the games we love. Decorations and atmosphere are all part of that immersion. Whether we celebrate an in-game holiday with giant evil-looking trees in Orgrimmar or snowfall and towers of gifts in Sanctum, we log in and feel the changing of the seasons and a heightening of moods.

Speaking of celebrations, I believe we have a new year to celebrate here shortly. Happy 2014, everyone! May it bring you health, happiness, good times, and fun adventures in RIFT.