This is a guide for the 61 Marksman spec that’s suitable for most types of gameplay in RIFT including leveling, raiding, and all types of endgame group activities. It’s a pure ranged Rogue spec and features fantastic mobility, solid utility, and a rotation that’s fairly simple to learn. It won’t do quite as much DPS as most melee Rogue specs, but as a ranged spec it performs solidly. 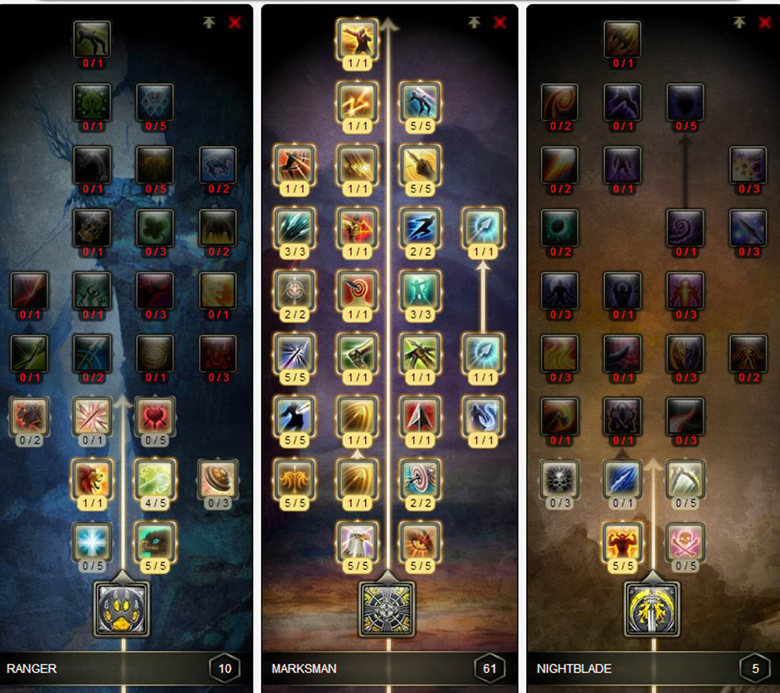 Why we don’t macro Deadeye Shot:

Deadeye shot has a 1.5 second cast time and requires you to be standing still. It does roughly 60-70% more damage but does not tie in with the Rogue GCD which is 1 second. This makes it roughly a 30% damage gain over Hasted Shot. A lot of fights require movement, and if you macro Deadeye Shot you often find yourself moving and cancelling it, thus wasting the GCD resulting in a DPS loss. That’s why it is better to keep Deadeye Shot on a separate key and only use it when you know you will be stationary for the 1.5 second cast.

Before going into the Marksman rotation, there are two things that you need to be aware of:

Use Free Recoil whenever it’s off cooldown (12s). Your rotation after using a finisher with it active should be Finisher -> Empowered Shot -> Finisher.

When Strafe is off cooldown, your rotation should be Empowered Shot -> Strafe (This will overkill your combo points by 2, but an instant cast Empowered Shot is more valuable than a finisher).

Whenever the target you’re attacking is moving and is expected to be moving for at least 3 seconds over the next 6 seconds, it is a DPS gain to apply a Barbed Shot in place of a Swift Shot.

When you have above 50 Energy and can get at least 3 targets lined up (always aim for the back target), your best AoE damaging ability will be Sentry Barrier. Below 50 Energy you should prioritize Lightning Fury and then Chain Destruction as your damaging abilities. The reason for this is that when you are casting Sentry Barrier, it is constantly draining your energy. When you’re casting Chain Destruction, it has an initial cost but you regenerate your full energy bar over the course of its duration.

Interrupt:
Deaden – Interrupts the target. If the interrupt is successful, silences the target for 5 seconds. Off GCD, 10 second cooldown.

If you’re looking to find information on how to min-max and get the most out of Marksman, check out Muspel’s more in-depth guide on the RIFT Forums:  http://forums.riftgame.com/game-discussions/rift-guides-strategies/class-guides/rogue-guides/351456-61-marksman-pve-ranged-dps-storm-legion.html