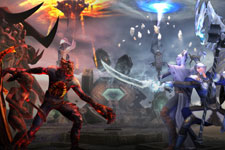 The Air Saga heats up this week in a new phase where the Ascended have been tasked with hunting down an old nemesis: Crucia, Queen of Storms!

Follow the action from your Saga quests into new zone events unleashing the Bloodfire Army against Telara. Defeating the firestorm of invaders will reward you with an Infernal Conduit, the key to battling one of Lady Glasya’s most powerful lieutenants in Bloodfire Strongholds.

Each Infernal Conduit lets players attempt a 5-player battle that offers new rewards such as Burning Cores for your Torrid Ember, a special event item you can hatch into a new Magma Walker mount!

Become Batman In Virtual Reality, Oculus Rift: Ever wanted to be Batman? Well, I became Batman in this video and it was amazing. Oculus Rift is amazing! ☞ Cl…