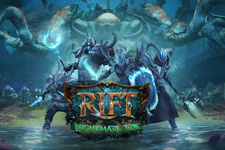 With the launch of Nightmare Tide, we have breached planar boundaries and together we march, ride, and swim into new realms beyond Telara. This is our first expansion as a free-to-play game, and it’s really exciting to be able to share it with all of you.

We’ve increased our maximum level to 65 and introduced the Mastery system to further customize your character as you venture into the Plane of Water. Explore three massive zones packed with quests and dynamic events, six dungeons, a new Warfront, a new Sliver, and in a few weeks – a new 20-player raid.

The Minions system brings all new collectibles, along with new ways to earn rewards and profit. Mentoring has been expanded and improved to allow players of all levels to play together – low level players can now scale up and play with their friends! That’s right, all players have the opportunity to experience adventures and zone events in the Plane of Water. Meanwhile, Nightmare Rifts bring new and terrifying challenges to every zone in RIFT. Test your skill by fighting unending waves of enemies while racing against the clock!

Of course, this is just the start of the Nightmare Tide era for RIFT! As always, the team will continue to add content, listen to your feedback, and work at making every version of RIFT better than the last. Your contributions and feedback are amazingly important; making RIFT wouldn’t be the same without the community we have and the support you give us.

It’s an amazing time to be playing RIFT, Ascended, so let’s go play! See you on the other side of the Infinity Gate.