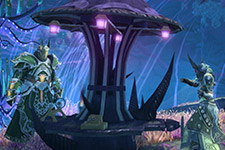 After meticulous study of strange temporal anomalies forming in Tarken Glacier, a bounty of new materials has been discovered that should make every profession rejoice!

These coveted components hail from the space between the planes, in icy Tarken expanses where the spinning edge of the cosmos siphons rare and potent energies from the elemental realms themselves. These rare materials debut with Planar Crafting in RIFT 3.3: Waking Nightmares, bringing powerful new items, weapons, armor, and accessories to Telara.

Ascended eager to uncover the secrets of this new crafting subsystem must seek out Tephael in Choreburg and complete his weekly quest to receive Planar Crafting Lures. Use these lures to tear open Planar Crafting Rifts in Tarken Glacier, then defeat their denizens to obtain highly coveted materials you’ll need for new Planar Crafting recipes!

There are 6 types of Planar Crafting lures – one each for Fire, Air, Earth, Water, Death, and Life – and each rift has a chance to drop relic crafting components exclusive to its plane. (These new materials can be fished out of the water, too, using new Planar Fishing Poles.)

In addition to holding an amazing amount of useful Nightmare Tide crafting materials, these new rifts also have a chance to drop former raid tokens, Strands of Draum, and Hearts of the Frozen, plus tradable Planar Crafting components used to create new, upgradeable planar gear.

To learn even more about Planar Crafting, watch our livestream preview and prepare for the launch of RIFT 3.3!