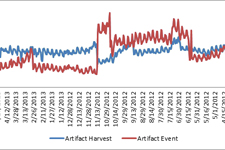 Over the past decade, data has been increasingly important in making game design decisions. Social games are among the catalysts for this change in thinking, primarily to hone in on the best ways to monetize their titles. Among core gamers, that’s created a perception that using game data = evil.

At Trion, we use the raw power of data for a very different purpose: we want to build a better game experience.

By understanding our populations and play-trends, by coupling the immersion of our development teams in-depth knowledge of our games with the analytical power of our in-game data, we have more information to use in making better, more fun online games.

By making a better experience, everyone wins.

I’m the head of a group of talented gurus of the data at Trion Worlds and today I’m writing about how we extract and use it to help our development team make our games bigger, better, and more fun with each update.

Let’s get into how the sausage is made in this data factory. To do that, I want to lay out the basics of the tools we use to crunch the numbers.

THE MAIN SUPPORTING SYSTEMS WE USE

At Trion, we have 3 different main sources of data for any of our games. We have the game databases that store everything that the game cares about, like your characters, our platform database that contains all details about your account and a log event system capable of capturing live in-game events as they occur.

This is the source that we’ll generally go to in order to answer questions like “how many Rogues have played in the last 2 weeks” or “of the players playing in the last 2 weeks, what’s the plot of their level ranges?” Other interesting things can be done with this, like getting the longest played duration of all characters across an account to help us understand class preferences across the world.

AND ON TO THE PLATFORM DATABASE

This is the repository where all of the account level data is stored. This is the master record of all things that relate to the status of the account (such as knowing if people have opted in to receive update emails and whether or not an account is banned).

This is also how we know which language to talk to people in, which games the account has access to, and so on.. We can blend this data with the others to compile e-mail campaigns, or when we want to determine what products and services players have purchased, and so on.

The event system is a truly massive beast.  It’s where we record the majority of in-game activities. Logins, logouts, experience gained, player killed, monster killed, etc. There’re a lot of very detailed things that can be gleaned from the event logs. More than just for analysis, this is also where GMs look when they need to answer petitions from the game.

WORKING TOGETHER, WE MAKE GAMES AWESOME

Using elements of all of these, one of the most useful things we’ve created is something that’s simply called the “Daily Activity Report.”  It’s a monster that belies the simplicity of that name.

This blends data from all of those sources above, to not only tell us how a game is doing day-to-day, week-to-week, but it also breaks down the every in-game activity by user.

That’s really powerful.  This report rapidly became an important guide for designers in letting them know how much their parts of the game were being played.

The designers are the experts on why, and we don’t pretend that data has the answer to that – But we can answer key questions for them, like how many, and how often, to help them in their decision making. We see something like x number of users played Rift yesterday and of this base, y% participated in a normal dungeon, whereas z% participated in PvP. Depending on the timeframe, this might tell us which is the prevailing activity in-game.

HOW DATA HELPED GIVE FREEMARCH & SILVERWOOD A FACE-LIFT

In late 2011, we did a deep dive to find out why players were leaving RIFT. We found a very interesting fact: there was a higher rate of players leaving between levels 7 and 14: players were getting through the tutorial and into the main world but not progressing much further. We took this information to the development team who went into the game and look a hard look at what was going on in areas we had highlighted. The team found that by spreading out our large groups of creatures, we could make running paths less congested and more manageable to a new players. We also modified the quest flow to minimize backtracking and improved the flow and difficultly of the early experience. While the design team did the heavy lifting to research and implement the gameplay decisions that improved the Freemarch and Silverwood experience, that work would have been far more difficult without being identified by the power of our data.

MAKING “WE’RE ON THE AIR” BETTER THROUGH DATA

Shortly after Defiance released, the data team went to work crunching the numbers on what was and wasn’t working in the game. After some digging, we found that “We’re on the air”, a mission in Defiance where you protect the local radio station, was the most abandoned mission in the game. We sent this and other data points to our development team and set them to work. This resulted in making a far less frustrating and more fun mission: we changed the structure and flow and
Community

Thumbs Up if you have or are planning on giving Rift a shot now that it is Free 2 Play I am still taking a break from wow and casually playing rift in my fre…
Video Rating: 4 / 5