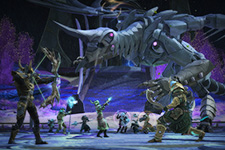 While fighting with Crucia’s Storm Legion still rages, Ascended have discovered the abyssal passage into Tyrant’s Forge, the second 20-player raid to debut in Nightmare Tide.

Cast aside the Yrlwalach, summon your allies, and chase the Queen of Storms to the dire foundry where Legion technicians race to complete a new body for the Dragon of Air – a marvel of magic and steel that will give her dominion over the planes!

Tipped off by ex-Storm Legion pirates, Guardians and Defiant have found the passage leading to Tyrant’s Forge. Unfortunately, its entrance is defended by Johan, a suffering monstrosity who is part akvan, part construct, part shark.

The victim of an operant-conditioning program gone wrong, Johan would gladly abandon Crucia were it not for the giant shock collar she embedded in his hide. Of course, the collar’s control mechanism is vulnerable, if you know where to look ….

Between Johan and the forge lies a sprawling rusted scrapyard known as the Storm Cage. Once bustling with troops and salvage operations, it serves as Crucia’s home for PUMPKIN, a deep-sea mech built to withstand the unknown depths (and horrors) of the Plane of Water.

The Legion have orders to use PUMPKIN should the Ascended arrive – though no one is quite certain how it functions above the surface. Rumors speak of violent elemental attacks and nigh-impervious armor, but also of the chance for achievement-hunters to win a version of the mech for themselves!

Suspended from an energized field at the top of the Legion’s guarded forge, a massive robotic dragon form waits to carry Crucia into battle once more. It is nearly perfect, it is nearly complete, and the Queen of Storms will go to any length to prevent its destruction.

Victory against Crucia – improbable as it may be – is paramount to the survival of the planes. It’s also extremely lucrative, as Tyrant’s Forge boasts a trove of best-in-slot gear including rings, necklaces, and capes with new proc effects!