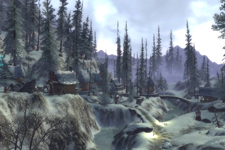 With the launch of RIFT’s 2.5 update, we were proud to unveil the new and much improved Iron Pine Peak. Since the launch of Storm Legon, many zones have been revised and upgraded, but Iron Pine went above and beyond: we completely rebuilt the zone, changing it from a 40-48 level zone and recreating it as a new mid-level experience for levels 27-35, introducing gamers to a new, snowy landscape far earlier in the game than ever before. Change of scenery is just the tip of the iceberg with the new Iron Pine Peak: we overhauled the storyline flow, quest continuity, and revamped the look and feel of the zone so that gamers again play an integral part in the tale of Crucia and the Storm Legion.

The notion of Iron Pine Peak being a mid-level zone is one that dates all the way back to the game’s pre-launch. This was a change that we had wanted to implement before the game went live but the overhaul was frankly too risky so close to our launch date. We wanted to do the zone justice, and that required time and concentration to pull off.

The desire to re-level Iron Pine was twofold: first, we wanted more choice for mid-level players, both in terms of scenery and quest lines. We wanted to introduce the environment to new players sooner gives them more visual diversity and a more compelling gameplay experience: who doesn’t love that awe-inspiring moment when you step into a new zone and everything looks completely new and different? With the new leveling experience, Telarans have multiple zones to choose from as they level (from snow to desert to lush tropical forests) right up to 60.

Our final reason for making this change is a fairly straightforward one: as Crucia and the Storm Legion are prominent fixtures in the first expansion, it is fun to introduce that story thread sooner in the game experience.

Naturally, the process began with converting the questing content to the same style we have been using for zones like Stonefield and Gloamwood, which entailed the following:

From there, we tackled improving the story experience and questing flow. We revised the storyline to give clear introduction to the Icewatch and the town of Whitefall and make a compelling and logical progression as you go from being an outsider to a hero to the people of Iron Pine. After we tackled the improved story flow, I then adapting this new flow to the desired leveling progression.

Most of this was pretty straight forward, but there were a couple of knots to be sorted out. The biggest one was Steampike Pit. This area was originally built to be dynamically changing daily quest content for level 50 players, a neat idea that often ended in frustration with many players. After our revamp, this area has now been converted so that the best daily quests are now integrated into the organic story flow, making the entire experience much more fun.

There was also a lot of content from the 1.11 world event, Tempest Rising, in this zone. With the advent of 2.5, this event also was remade and integrated in with zone content. Trickier were some of the art changes made when Storm Legion was introduced: the hole in the Chancel roof, the broken temple top out on the ice, and the porticulum to Dusken and Brevane.

The holes in the temple and Chancel roof existing from the moment you stepped foot into the zone also presented challenges: they prevented the story where the Icewatch are custodians of Crucia’s imprisonment from being as compelling as it could be (since there were gaping holes from her escape already in the building!) Since Crucia’s tale is so important to our world, it was imperative to us to restore the temple in the ice and the roof of the Chancel: they are now intact when you first encounter them. The holes now return as the story progresses, creating the broken version of the environment now only after Crucia escapes.

The story of Iron Pine Peak is beloved by many, so it was important to all of us to tread carefull and make sure it stayed in tact with all the revisions we made. Some quest arcs, like forging a weapon of the Icewatch and chasing Chekaroth across the world, are being improved currently and will be returning to the world in the near future. I’ll be eager to hear your thoughts when they do return!

So roll an alt and give the zone a new spin (if you haven’t already!) and please let us know what you think. Our work on the original classic zones is ongoing, but this is the only one we are going to be all out re-leveling. It was a complicated project with a lot of moving parts, but as fresh new players enter the zone in the upcoming weeks, I think it will have been worth the effort.