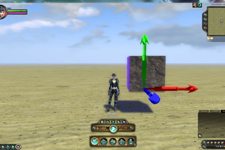 In the early days of RIFT, each time we, as a dev team, visited the idea of player housing, we had to ask, “Do we have what it takes to make this feature fun?” As much as we wanted to work on housing, and as often as players made the request, the answer was always, “not now.”

The situation started to change on Valentine’s Day 2012, when we released the wedding and marriage systems I’d been working on. The wedding ceremony instances are short, two-person dungeons where instead of fighting monsters, you proceed through a marriage ritual together. They hold up to 200 people, and the reception includes drinks, food, gifts, fireworks, and confetti.

Players loved them. We even made a Guinness world record for the most in-game marriages in one day. Most importantly, people didn’t just show up; we saw a genuine spike in subscriptions. It was clear that we’d provided a needed dose of RPG in our MMORPG.

Suddenly, there was a spark in the team and magic started happening: if Rift players liked weddings, what other non-combat activites might they enjoy?

And with that kernel of an idea, Dimensions were born. As an overview: dimensions are “slices of Telara” – player-owned instances that allow freeform object placement. While you can use these spaces as player housing, you’re free to build whatever you want (and boy, does our community do that! We’ve seen mazes, jumping puzzles, and small communes built into dimensions, just to name a few examples). We have about two dozen dimensions and nearly 1500 dimension items available in game, and we add more with every content update.

But I’m getting off track here. This is about the first Dimension and how the notion of Dimensions went from an idea to the creative canvas they are today.

After our extremely successful wedding event, we launched Fishing and Survival systems. They were a total win; players especially loved fishing. While a significant percentage of our players were out catching fish, our then Chief Creative Officer (now CEO) Scott Hartsman asked me if I’d like to be the point designer on our new player housing system. YES!

Our strike team was small but enthusiastic. We chose the name “Dimensions” for our system because we wanted people to know it was more than just housing. For example, we wanted to let players place items anywhere, not just in a grid – the world was theirs to mold as they saw fit, as well as every item we put into their hands. We also wanted to give players actual game-world terrain, not claustrophobic building interiors, and provide them with as much creative space as possible to build unique structures, events, and more.

It took us a while to figure out how big the base dimension maps should be. Too small, and you were always looking over the edge of the world. Too big, and our tools couldn’t handle them. Even after our engineers improved the tools, large dimension maps remained problematic. It’s a delicate balance, even today, to make sure a dimension has a decent view without making the base map too large.

One of the most fun features of dimension building started out as a bug. While you are manipulating a dimension item, you can move it through other objects, terrain, and your character. When you let go of the mouse button, the object’s collision resets to its new location and orientation. This means that if you place an item at your feet, move it upwards, jump while still holding the mouse button, then let go of the mouse button (fixing the dimension item in place) while you are in the air, you’ll land on top of the item in its new spot. This lets you climb and move anywhere in your dimension with just a single object… and for me, brings back fond memories of using the bricks in Solstice, one of my favorite old NES games. Anyway, we immediately recognized how awesome this was, and refined the tools so that it worked smoothly rather than removing it.

Dimensions are tall! As soon as we had functional item placement tools, we found ourselves driven to build upwards. Naturally, we kept falling, dying, and having to climb back up to continue building. We hated losing soul vitality just for slipping while our minds were focused on being creative, so we removed falling damage from dimensions. It was still annoying to have to climb back up again, so one of our engineers created an add-on to keep you in the air: the Magic Carpet.

On a whim, the main engineer working on dimensions tried something a little insane. He found a way to attach scripted game content to a dimension item. It was janky. It had issues. But it worked. That morning, half the office showed up at his desk to see his example creation: a campfire that shot fireworks whenever anyone walked up to it. Inspired, I had to see what I could do with this new tech. So I dug around in my scripting for the wedding instances, copied out the pieces that controlled the NPC serving drinks, and reorganized it so that it would work correctly in a dimension. Then, I attached the scripting to a dimension item that had previously been an ordinary table. Thus, Nico the Dimensional Bartender was born.

While the dimensions project already had a good amount of enthusiasm behind it, introducing Nico brought the team’s excitement to another level. We’d proved that dimensions could do something.

We limited our first dimension maps to Freemarch and Silverwood. At the time, our goal was to give players a slice of Telara they’d be sure to recognize. Unfortunately, neither of those zones turned out to be ideal for dimension maps. Warden’s Point and Sanguine Shores, the dimensions that came of those requirements, needed enormous maps or else iconic landmarks could not be seen. Conversely, the interior
Community