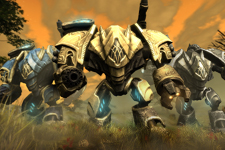 The Planar Research Institute has reopened Temporal pockets bringing new Golden Empyreal Walkers to Telara. Ascended level 30+ should seek out PRI reps in Sanctum, Meridian, and Tempest Bay for daily event quests, while players of all levels can hunt for Temporal Flux rifts throughout the world.

These rifts have a chance to drop new Temporal Flux Vault IIs, which are also available on the RIFT Store (and awarded for completing the “To the Strongest” quest and “I’m All Gears” achievement). Flux Vaults contain extra loot, and each has a (rare!) chance to include the latest (and most dazzling) mech mount in RIFT.