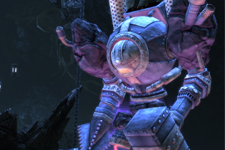 Our latest Tale of the Deep reveals the origin of Hammerknell’s Vladmal Prime – and the fate of the soul who brought it to life!

The dying dwarf’s eyes snapped open. The air was humid, pungent; it reminded him of the time he and Lilya had taken cover under the trees in Runic Descent. Storms had soaked them through, but it hadn’t mattered. They were there to celebrate. Vladmal was to start his job as foreman the next day….

The old miner’s reverie ended as a blinding light struck him from above, and he screamed as waves of pain rolled across his mind. When at last the light faded, a spherical head rotated into view. Vladmal shuddered.

He recognized the mechanical features of this dire construct from his time in Boundless Quarry. He knew it had come for his soul.

“Joining the ranks of the Runebound is a glorious distinction,” the automaton said in an otherworldly voice. “I assure you, though the process will be quite painful, I have no malicious intent. This is my gift to you.”

Vladmal thought to strike the horrid thing down, or at least to escape from its grasp. He reached out for his pick but could not find his arm.

“Yes, that is an expected result. Your soul has been extracted from its previous housing. It waits in alchemical stasis while I make the final arrangements for its new container.”

It was true, Vladmal thought, looking in horror at his body across the room. It was stretched out on his favorite cot, pick tucked into the nook of his arm. He was already bound? Concentrating, Vladmal saw – or at least thought he saw – the shimmering edges of his rune vessel.

“I am Valeri Prime,” said the construct. “I am charged with the repair of the mad god’s prison. I have need of your skill, master miner, and you have need of a new body.” It reached down to the dwarven shape and snapped one of its legs to prove the point. Vladmal felt nothing.

Valeri picked up the dwarf’s rune vessel and carried it into the mines. “Death need not be the end,” it continued. “There are no reasons artists like you and I need abide by the constraints of conventional mortality. We can give ourselves to a higher purpose. We, too, can ascend.”

The warped automaton arrived at another, larger construct that shared its design but was intended for heavier work.

“Do not invoke the gods!” Valeri snapped. “They cursed our people with the monster that lurks beneath us. And only my labor, my sacrifice, holds the madness at bay. Do the kings of Hammerknell aid me? Do they even acknowledge what I have done?”

Valeri opened the casing on the larger construct and began to inscribe runes upon the back of its armor with an ethereal ray. “I have born this burden alone,” it muttered. “Until now.”

As each letter was finished, a waft of vapor from the dwarf’s vessel transferred a bit of Vladmal’s soul to the machine. He screamed, again and again, madness overcoming.

“My apologies,” said Valeri. “Though the memories of my own transformation are clouded, I believe I found it … excruciating.”

Vladmal and the larger construct whimpered in unison, and when he spoke, it was with both of their voices. “What do you want from me?”

Valeri continued the inscription. “Do what you have always done. Mine the pillars of Telara and bring me its treasures. Elements I need for the next stage of my research. Elements I need to enact the Destroyer’s tragedy.”

Vladmal’s new faceplate slammed shut, and anger boomed under his metal shell. “I will never harm the Delve!”

The smaller construct began to shudder with laughter. “That is precisely what Rasmolov said to me. He was a dwarf of great resolve. With you …” Valeri lifted the ethereal ray, and with a few quick blasts erased the rune containing the dwarf’s conscience.

“Welcome, Vladmal Prime. The Boundless Quarry of Hammerknell has missed your loving touch.”

Vladmal was strangely calm; the many tragedies of Hammerknell no longer seemed so dire. The woe that had befallen Telara suddenly made sense. “I have missed the simplicity of the quarry. It brought me a purpose I long to return to. Will you be there with me?”

The smaller construct shook its mechanical head. “No, my friend. Your task will be lonely. I must attend to my research. Mine the reagents that I require and watch with me as our former brethren architect their own demise.”

Vladmal raised his new metal-malleted fist and smashed the once impenetrable rock before him asunder. Then he paused. A cold, alchemical thought had risen through the complex runic structure of his being. “Should we not labor to release the other dragons and bring down the Ward? It is the one thing that keeps our master out of Telara.”

Valeri laughed once more, and rotated her mouth into a twisted grin. “Oh, no. That is the lie. The great lie. The Ward isn’t there to keep the Destroyer out. It is there to keep something more terrible trapped within.”

It’s been a while since I got SCARED by the Oculus Rift! MORE Oculus Rift Horror ▻ https://www.youtube.com/playlist?list=PL3tRBEVW0hiCt3oQLqfyEPDlK0D5bbv_J AWESOME Oculus Games …
Video Rating: 4 / 5