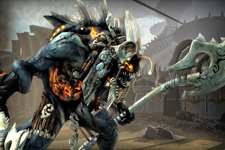 Lailia the Sage flopped through the shallow water at the base of the Tree of Gyel. Though she could breathe the air perfectly well, the mermaid found life on the surface painful and exhausting. She grimaced as the terrain grew rocky, and hauled herself onto a ledge where she could watch her line of deep ones stretching into the distance. One after the next, they crawled up and around the life-giving tree, each carrying a container of water on its back.

Lailia sang a tune of refreshment, to ease both her aching tail and the clawed limbs of her charges from Dobori Village. They were a sweet, shy people who had been badly used by the Abyssal dragon Akylios. After the dragon’s death, the poor creatures had needed help to recover. Queen Dronoea had personally asked Lailia to swim to the reef and tend to their healing.

Not long after, the Spout appeared and began funneling the reef’s ocean skyward. As the water drained away, many spread rumors of impending doom. But Lailia was a healer. She believed miracles could happen if you were willing to put in the work. So she led the deep ones on a daily pilgrimage to the coral mount, where they spread up and across the tree to nourish and soothe its branches with containers of water.

Lailia suddenly felt an intense heat. Beside her stood a little creature wreathed in flame. “Who are you?” asked Lailia, as the imp flipped through a book. “Are you in pain?”

He coughed, wiped something from his chin, and pointed up at the sky.

“And there appeared a great wonder in the midst of the ocean,” the imp read. “A woman clothed with the fires of the sun, and the moon under her feet, and upon her head a crown of wrath.”

Lailia followed his gaze and caught sight of a winged woman flying above the tree. From this vantage point, she appeared to hover just above Draum in the distance. The creature burned brightly, a phenomenon the mermaid had only seen once before in her long life.

“And the creatures of the sea fled before the moon. And the waters of the oceans were taken, and the land was burned, and the seas themselves became as fire.”

Lailia screamed in horror as the flying woman turned errant walls of water into columns of flame and set them plummeting toward the reef below. Soon, they had set what was left of the ocean ablaze, along with the coral tree she’d worked so hard to protect.

The imp leaped upon the rock and held his tome up high. “And upon her crown was written, from chaos and pain a new paradise is born!”

Lailia watched the mystic coral tree, the heart of Goboro Reef, burn. The deep ones that had been ascending it scrambled to get out of the way of the flames, but their containers of water went slick with oil and ignited in turn.

“And I saw a new fiery prison of the tormented,” the imp continued. “For the first world has passed away and been devoured; and there was no more sea, only the endless fields of molten sin.”

The prows of rusted of ships appeared amid the torrents of flame. Some sailed and others plunged the hundreds of feet to the reef. As they fell, winged erinyes took hold of their sailors – goblins, kobolds, Razudan, and others – and bore them to safety. Entire vessels smashed into the Tree of Gyel, exploding through layers of coral in bursts of molten metal.

“From the great tree of the ocean shall the chaos spread its fiery tendrils!” the imp wailed, slamming its tome on the rock.

A Fortune-class dreadnought overtook and scattered the bulk of the invading fleet, plummeting like a bird of prey into the center of the reef. Gyel shuddered under the impact. Its branches wilted and turned to ash, its skeleton blackened and fused into marble, and the soul of the coral tree that had sustained the reef for epochs burst into a living fire.

Lailia shook herself. She could not afford tears, not when these devils could turn them into burning oil. She hurried to save some of the younger deep ones, those too small to attempt the climb up the tree. “Help me,” she implored. “Take me back to the village. We will heal the survivors of this apocalypse for as long as we can, until the curse of Draum, or this infernal chaos consumes us. But we will never abandon hope.”