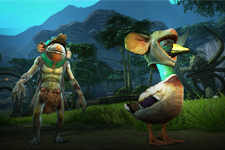 An elaborate tea party was set out among the grassy fields of the Landquarium. Max the bogling carefully poured tea into tiny cups while Oliver the mallard straightened a waterproof blanket. They had been best friends as long as they could remember, sharing picnics and adventures – even dressing like each other, Max in a duck bill and Oliver in a bogling cap. But today was more special than most: their favorite person in all the world was coming for lunch.

“Max, she’s here!” quacked Oliver as Jillian, a young dwarf, crested the hill. She came running when she spotted the two friends, and they hopped on webbed feet up to meet her.

“My favorites!” she cried, scooping the two Onir into her arms. Jillian was moved with good reason: she was their creator, a mortal who had dreamt them up when she was just four years old. Here on the Plane of Water, she was known as a progenitor, one of the makers of the Onir. And though much time had passed on Telara, she often came to them as her younger self, while dreaming of the days of old.

“Is it time for tea?” asked Oliver from the depths of a hug.

“I don’t know, it’s getting dark,” said Max. The normally crystal-blue ocean sky over Draumheim was turning a disturbing green-grey. Clouds and winds were gathering quickly – too quickly, Jillian realized, seconds before an unnatural eye pushed itself out of the clouds above.

The fleshy orb unfurled a host of nightmarish tentacles, tore a hole in the air, and summoned a monstrous being who towered over the friends.

Ten feet tall, eyeless, with alabaster white skin, four arms, and a sharp-toothed smile that wrapped all the way around its face, the creature was like nothing Jillian had dreamed before. “You’re not one of Jillian’s nightmares,” Max stammered. “Tell us who you are,” he tried to shout, but it came out as a timid croak.

“My progenitor was a cultist of Akylios,” the beast said, casually loping toward the trio. “I pursued him all his life, plaguing his dreams, poisoning his thoughts. I drove him mad. Then he died of fright in his sleep.”

The creature came to a rest over Jillian. “Lord Arak has shown me that evil lies within all progenitors, the young ones included.” He brushed the girl’s hair with his pincers. “I am Writhe. And I am here to cause the girl Tribulation.”

“Max! This nightmare will hurt her!” Oliver squawked. He leaped into the air and threw himself at the creature, a flutter of anger and feathers.

Writhe lashed out and caught the duck mid-flight. A red tongue emerged from its horrifying maw and licked its white lips, smearing them with congealed blood. “Delicious,” it crooned.

Writhe squeezed and Oliver fell to the ground, curled and motionless inside his bogling hat.

Max was heartbroken, but managed to shout through his tears, “Jillian! Control the dream like we taught you. Use the power of the nightmare against itself!”

Writhe turned toward the bogling. “Quiet, Onir!” He’d killed other dreams before – it was never as satisfying as a progenitor – but it would do. “Why do you help this girl? She gave you the slimy form of a frog! You are the heir of Draum, you could have been a warlike skelf, or a dark leviathan. You could have been an all-powerful Akvan. But her weak-willed mind squeezed you into the form of this useless, green croaker! You should hate her as much as I do!” Writhe raised his pincered appendage to strike when he was interrupted by an urgent whistle.

“Get over your parental angst, you eyeless freak!” Instead of a little girl in a sun dress, Jillian stood as a powerful Dwarven warrior, resplendent in the finest Empyrean plate. She grasped the nearest patch of nightmarish corruption, cleansed and reshaped it into a shining ball of healing light, and channeled it into the grievously wounded duck at her side. Satisfied the spell had taken hold, she leveled her sword at the blank-faced nightmare and commanded her dreamlike avatar forward. “Surge!”

The warrior flew like an arrow toward Writhe and plunged her blade into his heart. As it pumped out its foul blood, Writhe’s horrific mouth opened and closed around a whisper. “You will never forget this, child. You will dream of me again. I will be reborn!”

Max and Oliver, who’d healed from bill to tail, wrapped Jillian in a massive embrace.

“I’m so glad you two are all right,” she said. Jillian had recently lost a friend while adventuring in the Dendrome, and couldn’t bear to lose another. This dream had cut too close to home.

“I love you two. You’re my oldest, dearest friends,” she said. “But I am twenty-nine. Maybe we’ve had enough of the tea parties?”

“The satyrs will be so excited!” croaked Max.

First try on the Oculus Rift. Spoiler. I love it. Subscribe with this handy dandy link! – http://bit.ly/13OT2RF And for alternate sources of British Banter, …