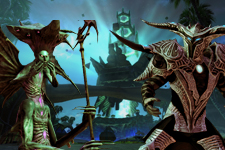 “Fools!” cackled Alsbeth, as a new wave of corpses clawed their way out of the scorched earth. “Did you think my master would let you escape so easily?”

Her shambling horde was disconcerting, thought Kira. It was too large, its zombies, skeletons, and wights bolstered by otherworldly shapers and their hideous creations. Still, she grinned as she vanished beyond the fissure running through Alsbeth’s ranks, a volcanic gash that looked distinctly like the disapproving sneer of Rahn Chuluun – even as it threatened to split Telara in half.

This discordance was lost on Alsbeth. She continued to wail and chant. “Your petty machines will help you no more than the gods you– ”

Kira’s quick yet savage strike put an end to the woman’s screeching. She made sure to twist the knife just a bit. If she was going to relive this apocalypse, she might as well enjoy it.

Alsbeth crumpled, but the body that sprawled across the ground wasn’t hers. It was that of Kira’s companion, Uriel. The Bahmi clutched at her messy wound and tried to hold onto her insides. “Why, Kira? Why cut our time short?”

Kira leaped out of the tent into a relentless rain. A saccharine sweetness hung in the air, a purplish mist that Kira had tasted it in her dream. It parted as a Mathosian guard stumbled into view.

“Why aren’t you at your post?” Kira asked. “What happened to the watch?”

“I didn’t mean to go in the woods, Mommy!” the guard said. “The little green man promised me candy.” He stared at her vacantly, his voice soft like a scared child’s. He was sleep walking, Kira realized. Everyone in the camp seemed to be sleep walking, she discovered, each lost in a nightmare of their own making.

Kira heard a familiar rumble in the sky, the machinic sound of unimaginable power coursing through the ancient stone of the floating Infinity Gate. If someone had been working its controls in their sleep – if Uriel had been at them late like she so often was – who knows what new horrors had been released.

Kira sprinted across the rain-slick stone toward the Empyreal controls, and two figures came into view: Uriel and a hooded figure who stooped beside her, whispering into her ear as she operated the massive artifact. With a scream, Kira leapt at the man, taking him down with a single slice of her dagger.

“Wake up, Uriel! Don’t press anything!” She embraced her companion and pulled her away from the central dais filled with its hodgepodge of magic and technology. Uriel groaned unhappily, reaching unsuccessfully for the controls, then woke with a start.

“Kira! What … am I doing out here?” The Bahmi mage shook off the tendrils of sleep. “I dreamed I was a girl again, playing a game with my father. It was an old Eth game that looked like the Gate’s—”

“Controls,” Kira finished. “That one there is responsible.” She pointed her dagger toward the hooded figure, who was already spitting up blood.

“The Dream Coven teaches us that life is but a sleeping illusion,” he said, laughing through the pain as he spoke. “Now is my chance to wake.” Kira knew it was never a good sign when they died with a smirk on their faces.

“We’ve got bigger problems,” Uriel warned. “The Infinity Gate is moving. In my dream, I must have … set it adrift.”

“Can you stop it?” Kira was genuinely frightened. She hadn’t studied the artifact like Uriel had, but she knew well enough that it was capable of destroying Telara.

“No. The dream, the rules … are gone.” The mage blinked as the gate shifted and surged overhead. “And it’s moving out of range.”

Kira watched, disheartened, as the ancient God Engine lumbered across the sky, toward the sea. “Do what you can to prevent the apocalypse. I’ll handle the hard job.” Kira unbridled a fast crocnard and draped the fallen cultist across its saddle.

“I’ll tell the Faceless Man that the dreamers have struck again.”