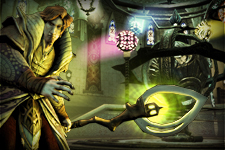 RIFT is setting sail for the planes in the upcoming Nightmare Tide expansion, but what awaits is still shrouded in mystery. Last night, leaders of the Ascended gleaned a first look at their destination (and the nature of its horrors) in a report from the Empyreal Alliance’s Commander Blaith. Her early findings, reprinted below, paint a haunting picture of things to come….

As Commander of the Empyreal Alliance naval defenses, I was charged with assessing threats from the Plane of Water, and my findings have been both mystifying and grim. A combination of exhaustive studies and first-hand battles show the realm poses an imminent danger to Telara … that seems to be constructed from the fabric of our dreams.

If that sounds as sea-brained as the mad god himself, please let me explain.

A recent incursion off the coast of Kelari Isle laid bare the power of Demogos, a malevolent beast from the sunken realm. He manipulated the dreams of scattered Wanton cultists, and it was in and through these dreams that they brought him a tablet used to wake one of the evils known as the Akvan.

Just how could these cultists stir phantoms to action in the sphere of dreams? For once, researchers at the College of Planar Studies and Quicksilver College agree: sleeping mortals resonate with Tidal energy signatures indicative of planar travel. In short: the unconscious hobgoblins of our minds walk in the Plane of Water while our bodies lie dormant on Telara.

This appears to fit with Demogos’s claim that he is not a dragon, but a nightmare – the embodiment of the fear and shame felt by the Wanton after their defeat at Mount Carcera. If we take this monster at his word, we must assume the collective fears of other cults are manifest in the Plane of Water … and are just as set on our demise.

These are dire tidings, for Arethea’s Song of Dreams implies that entities far more powerful than Demogos wander the plane of seas. Indeed, careful analysis leads us to believe the Akvan themselves may be nightmares come to life. Creations of something ancient, primordial, sentient … and seriously deranged.

Our best calculations point to a celestial body orbiting the Plane of Water as the likely source of the largest and most volatile nightmares. We are eager for Orphiel Farwind to weigh in on the matter, but all my attempts to meet with him have failed. There are many within both factions who now believe he knows more about this plane than he has published, and that the threat to Telara grows the longer he keeps this knowledge secret.

Telara has suffered much in recent wars against the cults, against the Legion, and against our own dead. I wish I could see end of our troubles on the horizon. Instead I see new expeditions beset by fresh terrors.

Unless or until we understand the phenomenon giving rise to new armies in the Plane of Water, I urge you all to prepare. Keep a journal of your dreams, share them with those you trust most, and rest assured you are not alone in what lies ahead.

FOR MORE INSIDE GAMING, GO TO: http://www.youtube.com/user/InSideGaming Kovic and Bruce talk about the lawsuit being brought against Oculus Rift by ZeniMax M…
Video Rating: 4 / 5