Posted on September 4, 2014 by Rift Universe 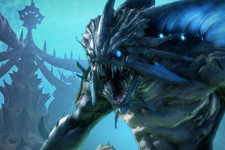 Salblet hated the dry air. The skelf could survive indefinitely out of the sea, but his eyes could not make out fine details and they itched. Still, Grenk had insisted on Salbet’s company, and one did not refuse Grenk unless you had a school of the Atragarian Guard at your back.

Now Salblet could hear her clicks and growls behind him. He could feel her movements in the current, and her scent filled his nares. She smelled like the frenzy–like blood and meat. The smell was intoxicating.

Of course the Atragarian royalty used their control over the current to carry such smells away. It led to greater cooperation in their holdings – in the Well, no morayans had been eaten in years – but Grenk was an outcast from their domain. She had found a new leviathan to make a pact with, and now she ruled her pod with fear and magic. The joy of the hunt. The moment of bloodlust and rage.

“What am I looking at? A storm? A typhoon?” Salblet asked, trying to calm himself. He hoped he hadn’t displayed fear. This was a test. If he passed, Grenk would recruit him into her school and help him make a pact with her master. They would swim together, piloting a leviathan toward prey and feast. It was the old ways of the skelf. It was why they were feared and respected, desired as troops and advisors throughout the seas. If he failed, she would turn him into chum.

“That is no storm,” said Grenk slyly, her oily voice rumbling through the water. “That is the spout. Look where it goes. Look up at the new nightmare.”

Salblet followed the spout of water with his eyes. It twisted forever upward, piercing the cloudless sky, carrying the current toward a moon that sparkled like a vast shell above the ocean. “Draum!”

“Yes! The dreaming moon takes back his blessing, the tidal power of the sea. Soon it will all be gone.”

Salblet dove back into the water in fear. “What do we do? How do we save the reef?”

Grenk’s mouth opened in an expression common to the skelf, the joyous beam of discovering prey that is wounded. She knew she had won. Salblet would not resist her taboo proposal. “Save it, my dear jack?” she asked. “I intend to sacrifice it.”

Quickly, as shock gave way to terror in the young skelf’s face, she pushed a corrupted moonstone into the flesh of his forehead. Salblet writhed in pain, and his third eyelid clamped down as if he was in the frenzy. But instead of the red darkness that accompanies the skelf’s lust for blood, he saw a vision of his beloved reef.

Salblet shuddered as the nightmare took shape: He stood dumbfounded before the coral tree of Gyel as it rose, burning, out of a sea turned black with tar. He saw that its skelf attendants were desiccated, blackened, and charred. Their Atragarian rulers lay bleeding upon a rusted metal altar, and the fiery wrath of the furies whipped around the base of a demonic tower that loomed overhead.

Then the scenes began to shift.

Salblet found himself in a shimmering passage where a monstrous beast, covered in hair and otherworldly armor, emerged from the ruins of an alien gate. As it approached, all went black.

Salblet thought he was alone until an eye opened in the darkness, a glowing green orb suspended from the end of a fleshy stalk. The eye looked over Salblet, blinked, and opened again, this time with a mouth, nose, and eyes of its own. Its lips scissored up and down over razor teeth, blood misting from old wounds as it chanted in the voice of the deep: “AKVAN TIROYOGO.”

Salblet screamed. His perspective had changed again, this time to a dimension far removed from his own. A wriggling mass of tentacles surrounded an infinitesimal mote holding all of the seas in all of the planes of existence. They’d been compressed into one point, and only those that swam among the ancient leviathans survived.

Salblet eyes opened and the vision fled. Grenk was staring at him with the look of a thresher about to strike. “The Akvan are awakening. Will you join my pod, young jack? Will you make a pact and become the thrall of Shikolec?”

Salblet thought of the eternal darkness, of swimming in directions he could not perceive beneath the immortal Akvan, of life as a true thrall, of returning to the ancient ways of the skelf. It terrified him, but less than the sight of Gyel on fire did and less than the hulking monster from the gate. Salblet felt his choice would decide the fate of Goboro, the skelf, and the plane that he called home.