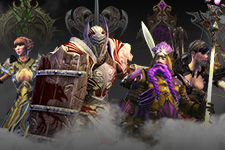 We’re happy to announce that the RIFT Storm and Dream Souls Packs are now available on Glyph as well as in the game! Each bundle adds 4 Souls you can use to customize your characters’ roles and abilities, giving you access to a nearly infinite number of builds:

– The Dream Souls Pack lets you play any role in RIFT with any one of your characters thanks to the role-busting power of the Liberator, Oracle, Physician, and Arbiter.

Learn more about each of the Souls and Soul Packs on Glyph today!

So let’s talk about virtual reality and what it means for the future of entertainment. Whether its projet morpheus, valve’s new vive (or is it revive?), or the oculus rift, these things are…