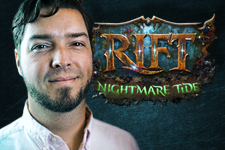 Memories of an Ascended

Long ago when I stepped into the world of Telara, I saw a land that was under siege. Strange beings from the elemental planes ripped holes in the very fabric of reality – creating the rifts. Out of the rifts the enemies of the Ascended poured, growing in power and intensity. Great colossi strode across the land, too powerful for any single Ascended to face. As we banded together to push back the invaders, close their rifts and smash their colossi, I remember the sense of being part of something bigger. Even though I did not know many of the Ascended that stood by my side, we all had a shared purpose: Push back the invaders and save Telara.

In the wake of the great invasions, I recall thinking to myself: When will we take the fight beyond the rifts and see where these terrible planar horrors are coming from? What do the realms of the Blood Storm look like? Are there more terrible foes than the dragons lurking in the depths of the planes?

I know many of you have asked these same questions over the years. You’ve written about it in countless forum posts, feedback reports, and asked us on live streams. After facing down Akylios, who hasn’t wondered what sort of realm would spawn a being so horrifying and inhuman?

The answer to all of these questions is near, Ascended! This year we will release RIFT: Nightmare Tide, our next major expansion. Nightmare Tide will take us beyond Telara, into the Plane of Water – a realm of nightmares, dreams, madness and danger where you’ll encounter new foes, new allies, and confront plots that threaten the entirety of existence. What horrors and monstrosities have filled the abyssal depths left by Akylios? Prepare yourself to take the fight to the planes and face these threats head on!

In Nightmare Tide, you’ll dive into adventures in brand new open-world zones and story quest lines. You’ll team up with other Ascended and test your mettle in new planar dungeons, raids, raid rifts and slivers. You’ll take part in massive dynamic battles in the Plane of Water, seek out new artifacts and collections, and craft new weapons and armor. Access to all of this content will remain absolutely free – part of our promise to you since converting to our highly successful Free-to-Play system.

Nightmare Tide also expands our dynamic content offering with an entirely new rift type: Nightmare Rifts! These rifts feature scaling difficulty and nearly endless waves of foes to test your skills and determination. Twisted enemies, hectic challenges, and a surreal environment await those who are up to the challenge (and the all-new art for Nightmare rifts is absolutely wicked, bringing a brand new feel to rifts!).

Ascended will also have a new account-wide collectible: Minions. As overlord of your minions, you will send them on missions where they can gather resources, collect currencies, find items, and gain their own levels. To reap maximum rewards, you will have to choose wisely, matching your minion’s strengths to the mission at hand.

Nightmare Tide will feature five new levels for you to earn, increasing the level cap to level 65. With each of these new levels, you will gain a Mastery from a suite of options based on your Calling (as opposed to your selected Souls). Masteries are designed to expand your choice in builds, add new synergies, and let you further customize your character so you can play how you want to play. We believe that the Mastery system will add diversity and choice to the Soul system, without adding unneeded complication.

New equipment slots are also available in Nightmare Tide. You will be able to unlock these new slots for your entire account by purchasing a digital edition of Nightmare Tide, or you may unlock these new slots per character by playing the game and investing time and resources. We want to ensure that there is a fair and equitable way for you to earn these equipment slots while offering an opportunity for you to show your continued support of RIFT development.

A ton of new loot is also on the way. But fear not Ascended, we’ve been listening to your concerns about loot and how it ramps into Nightmare Tide. The current plan is to ensure that the best gear in the game today lasts you all the way to level 65 – and a bit beyond. If you are decked out in high-end gear, don’t expect to replace all of it with a green drop in the first zone. You can gain a distinct advantage for the release of Nightmare Tide by playing now and obtaining better gear.

While we are all extremely excited about Nightmare Tide, our Game Update 2.7: Binding of Blood, isn’t even over yet! Summerfest is still on the way, as well as a new Warfront: The Blighted Antechamber. We’ve found it to be incredibly rewarding to release new features and content week over week during the course of major updates, and the feedback we’ve gathered on this approach continues to be extremely positive.

While development continues on the expansion, the team has also been hard at work breaking ground on our last game update before Nightmare Tide. RIFT 2.8: Madness Wakes is currently under development and includes some exciting updates to the Auction House that have been long requested. Major updates are also in progress for multiple Souls. Madness Wakes will unleash The Nightmare Coast dungeon – our first dungeon from the upcoming expansion – as well as a series of quests that help set the stage for Nightmare Tide.

If you haven’t played RIFT in a while, now is a great time to dive back in and experience all of the changes and additions we’ve made! Gear up and prepare to take on the planes with four new Souls that open up new roles and synergies for each Calling. Master a new crafting profession, Dream Weaving, before your journey into the planes. Bind
Community

A COISA MAIS LEGAL DO MUNDO!