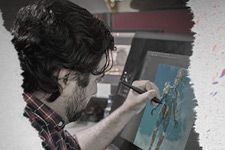 Ocho: Could you introduce yourself? SM: Hi, I’m Stephen Mabee, Senior Concept Artist, also known as Drakcoon on the forums.

Ocho: How long have you been here? SM: Around a year and eight months. I’ve been with RIFT since the beginning, though!

Ocho: Tell me a little bit about your history with RIFT. How did you start? SM: I originally came from another MMO, where I was a hardcore raider. I had hit a couple world firsts in that game, but it had gotten stale and I was looking for something new. The early news about RIFT, especially dynamic rifts, really attracted me so I came over with some of my friends to check it out.

Ocho: What are some of your favorite memories of playing RIFT? SM: Interestingly, I really enjoyed the process of leveling up! The large group of friends who I was playing with was a big advantage. Killing Greenscale together for the first time was a huge rush!

Ocho: Do you still play RIFT? SM: I still play RIFT quite a bit. For me, it’s father-and-son bonding time, since my father also plays. We’re big into PvP and playing Warfronts together.

Ocho: Favorite Spec? SM: Right now I’m playing Warlord and Reaver. Reaver is pretty solid at the moment, but Vladd is sure to keep changing things to keep us on our toes.

Ocho: What’s day-to-day life for a concept artist on the RIFT team like? SM: Every day I get tasks from my manager, Marigold. She explains importance, and we tackle them in order. I’ve been working on armor and mounts for a while, making sure we have new stuff in the pipeline for players. Once I’ve got my tasks, I get my coffee and go at them!

Ocho: What have you been working on lately in RIFT? SM: Recently, I’ve been working on the Shalistiri who we’re fleshing out for an upcoming release. They’re genie people who have been getting more attention and backstory. I start with the bosses and gradually work my way down towards the base creatures. I’ve also worked on a set of weapons for them to go along with that.

Ocho: Do you spend much time looking at references or searching out inspiration? SM: I usually gather a bunch at the beginning, looking at Google or surfing art sites. I generally have a pretty good idea of where to go after talking to Captain Cursor, who comes up with the story and lore side. For the Shalistiri, I thought genie. It’s a little cheesy, but my mind went to Robin Williams, so in a way it’s a bit of my tribute to him. Other things I looked at included Middle Eastern cultures. The Shalistiri are air creatures, so wind and air motifs play in a lot. Flowing and elegant designs were on my mind while concepting them.

Ocho: What’s something you particularly liked after seeing it in game? SM: A lot of it hasn’t been released yet, but the next raid we will release is really exciting to me. It’s a bit of a different direction than we normally go, but the raid will be unique visually with a lot of different elements that will be completely new to RIFT.

Ocho: What is your favorite thing to create? SM: Big, bad bosses. When I go to the forums and I see a boss that I helped design being a challenge for players, I enjoy it. When folks do finally beat it, it’s glorious, with a lot of yelling. I’ve been there so I know how great that feels.

Ocho: How did you get involved in doing art? SM: I started doing art, drawing and whatnot, at a really early age. My parents both loved art. My dad was into fantasy art, and it was always around growing up. Dad was an inspiring artist, but he went the military route, which is a bit different. They were always very supportive of my interest in art.

Art went away when I was in middle and high school – I had other things on my mind at that time. I guess I got really serious about it again towards my senior year of high school, when I was figuring out what I wanted to do with my life.

Ocho: Did you go to school for art? SM: I attended Ringling College of Design in Sarasota, Florida.

Ocho: What was your course of study? SM: Originally, I was considering computer animation, but the year I started school was sort of the end of traditional cell animation. I re-evaluated what I wanted, and went with illustration as a general field.

Ocho: Do you have any advice? Concept art is pretty much the coolest art job in the company. It’s what most folks think of when they say, “I want to create art for video games!” SM: Spend more time on art than anything else, even games. Draw every single day, and spend most of your day doing art rather than whatever else you could be doing. You might think you’re missing a lot, but most of that can be made up. Practice is super important and just takes time. You can’t fake tens of thousands of hours drawing.

Ocho: How do the long development cycles and delayed gratification from seeing your creations in-game impact you as an artist? SM: I don’t mind it too much. I’m constantly creating new art, so it’s nice to see stuff I’ve worked on pop up. It refuels me and keeps me going. Since it’s been so long, I can look at it with fresh eyes. The next raid we will release was concepted months and months ago.

Ocho: So you’re the guy who has all the info the players want about future content? SM: I might know a few things. We work really tightly with the design team, because the closer we work together the better the stuff we come up. We have a really great relationship with the designers here on the RIFT team.

Ocho: What’s it like digging in Captain Cursor’s
Community