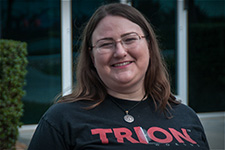 It’s always fun to meet Devs on the RIFT team and learn more about what they’re working on next. This time Community Manager Eric “Ocho” Cleaver is sitting down with RIFT’s Lead Content Designer to learn all about her! Ocho: So where did you come up with your handle?

Julia: It’s based on my very first MMO character from back in 2002. Actually, it goes back even before that, to my days of Live Action Role Playing when I was much younger and geekier than I am now!

Ocho: What’s your Role on the RIFT Team?

Ocho: What does that mean?

Julia: I oversee all RIFT content, from Instant Adventure to Story Quests to Zone Events. I also work closely with the Systems team to integrate what they do into new events and features. Explaining some of the differences between different roles on the team can be a bit confusing.

Ocho: I like to explain it as the Content Team creates what people do, the Systems Team creates the powers they do it with, and somehow the Engineers make it all work (but now I’m rambling). How did you join the RIFT Team?

Julia: You’re allowed to ramble! Let’s see – back in 2009, while I was working on another MMO, I heard (a lot) about this project some of my ex-coworkers were working on called Heroes of Telara. They kept telling me about the amazing team and eventually convinced me to come out to California and check it out. A month later I was working for Trion as a Content Designer. I started on Freemarch and Silverwood, and 5 crazy years later I still love it. I could probably create a RIFT zone in my sleep at this point!

Ocho: What’s a piece of content you look back on and say “Wow, I’m really proud I designed that”?

Julia: I am still really proud of the Kira and Uriel quest line. At the end of RIFT Beta, we decided we wanted to do more focused quest storylines to flesh out some of the characters who players interact with regularly in game.

I was working with another designer here on the team, and about halfway through designing the quest line for Kira and Uriel we turned to each other and said, “It seems like there would be a romantic connection between these two based on the story we’re writing.” So we decided to go with it. Over the years we’ve gotten many positive reactions and lots of great messages from players talking about how much it meant to them to see two of our face characters form a same-sex relationship.

Ocho: What piece of content that you worked on was something you think the players enjoyed the most?

Julia: Probably Ember Isle. With Ember Isle I was involved in every stage of its creation, from working with the Art Team on concept art all the way through creating quests to final polish. A lot of people have told me over the years that Ember Isle was some of their favorite content in RIFT, which makes me really happy!

Julia: Before I became Lead Content Designer, I was responsible for a list of development tasks and making sure that those pieces of content got done. I think of it like a puzzle: I had some of the edge pieces and a few of the pieces along the side to worry about. Now my job is to make sure the whole puzzle gets completed (while continuing to contribute my own pieces now and again). It’s both a stressful and rewarding experience, but I have the benefit of working with an amazing group of people.

Ocho: While we don’t want to talk too much about the RIFT 3.2 Update yet, is there anything you’d like to hint at right now?

Would this be a good spot for Instant Adventure?

Julia: Well, one of the Senior Designers (Tacitus) and I have been talking a lot about improving some of the INSTANT aspects of the game, especially those related to ADVENTURE. He’s got some interesting plans on how to make the current system more engaging for players of all levels – and a few surprises as well. Of course there’s a lot more to 3.2 than that, and you’ll be hearing more about it as we get closer to release!

Ocho: Do you have any final message for the players, or anything you’d like to ask them?

Julia: Mostly I’d like to thank you guys for the last four years. It sounds cliché, but we couldn’t do this without your feedback, play testing, and support.

My question to all of you is what would you like to see in the next four years of RIFT? Is there something we used to do more of that you miss, something new you’d like to see, or something you wish we’d never do again? Let us know!

Ocho: Thanks a ton, it’s been a lot of fun talking to you and I know the players will be glad to learn a little bit more about RIFT and its team.

Now it’s your turn, Ascended. Head to the forums and post your answers – Darkmoon can’t wait to hear from you!