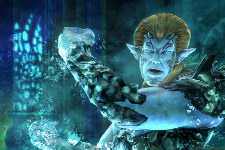 Embark on a brand-new Saga Quest revealing the origins of Lord Arak. All level 65 Ascended have received a letter from Purgav, a concerned Ghar Researcher in Goboro Reef, opening the door to this journey to the realm of dreams. Act 1 is available now. Act 2 is set to release on July 29, followed by Act 3 on August 12!

While you’re fighting through Tarken Glacier, stop to battle invaders from Planar Crafting Rifts to acquire all-new materials used in recipes of unprecedented might.

Scale the Glacier in this max-level Instant Adventure that will take you from the jaws of the reanimated dragon, Shigoroth, into the twisted mind of Cosmologist Mann.

Those who achieve the coveted Silver Tier of Loyalty will be rewarded handsomely with prizes including Distinguished Levitate, the Miss Moneypiggy Companion Pet, and a special new “Pay to Whinny” Minion card.

Return to Gilded Prophecy with three levels of challenge including an all-new Introductory level that allows you to raid in a more forgiving environment. Already an accomplished raider? Then the challenge can be increased with commensurate rewards!

Waking Nightmares arrives with new Server Bank Slots, Wardrobe Collections, Fashionable Achievements, Hardmode for Rhen of Fate, and more additions to your favorite systems, plus a new Power Pack and a special Credit Promo: Now through July 31 you’ll fish up an all-new Nightmare Thresher Mount when you buy a $ 100 Credit Pack in-game.

So venture forth, Ascended, and experience epic encounters both old and new. Waking Nightmares has arrived!