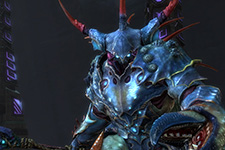 When we started looking ahead for what we wanted to do for the next set of Raids, we realized that we have a ton of great raiding content that doesn’t get utilized near as much as the content deserves. Great Raids don’t get run very often anymore, because they aren’t relevant to how today’s RIFT player can progress their character. This is something we hear a lot from the community as well; they want a reason to go back and re-experience these epic encounters. Once we came to that realization, there was a clear choice on which series of Raids would be the best choice; Hammerknell. So we decided that we would head back into the depths of the once hallowed dwarven fortress, to update it and to take a fresh look at what made HK unique.

In deciding we would tackle the re-mastery of Hammerknell for the Echoes of Madness update, we faced a formidable task: evaluate the entire dungeon, and separate the sacrosanct from those encounters that hadn’t aged nearly as well. This was a seemingly easy job for such a gem of design as HK, but it proved deceptively challenging. In the years since HK was originally released the combat system of RIFT has evolved immensely. Class design is very different from what it used to be, and philosophies of threat management, tanking, and so on have changed. Players have far more tools, and underlying global principles, such as falling damage were no longer answers to aspects of fight space design. These considerations had to be made for everything we would keep. Everything else we would have to rethink or outright redo.

The obvious classics that aged well like Murdantix, Zilas, Akylios, Sicaron, Inwar and Grugonim were approached knowing that we’d aim to keep them as folks remembered more rather than less. Other fights that held substantial challenges to modernize were next. The Rune King Molinar and Prince Dolin encounter was also among that list, but still presented problems with the modern advent of the mage tank. Matron Zamira held inherent fight space and threat design issues that needed to be revisited. Inquisitor Garau lacked depth and simply didn’t function correctly with modern tools available to players. In other cases, like Vladmal Prime and Estrode, we knew the fights weren’t going to work without significant changes. Knowing this, we built a prioritized list for first draft revisions that we would assemble for public testing in addition to the balance work that had to be done across the board.

Getting everything ready for public testing by the time PAX East concluded was our goal. That’s all the math for balancing, all the new mechanics and design outlines implemented to a rough working order, all the test box equipment and a mountain of behind-the-scenes odds and ends that had to be done. More important than the mechanics though, we also understood the need to improve our testing process and transparency so that we had a clearer picture of public opinion and feedback. So on top of orchestrating the execution for getting HK ready to test, we designed a new testing policy and forum with the hope to improve discourse and get the feedback we needed, to give the community what they wanted. It was a substantial amount of effort and coordination to achieve in the timeframe but when we hit the mark it paid off, thanks to the RIFT community.

The initial sign-up for the new process took a little time, but the number of players who volunteered their time and provided their insight was certainly worth it. We received great feedback and had real discussion about the direction of our approaches to the fights and about what the community saw as sacrosanct versus our opinions. The forum feedback greatly improved our strategy. A number of fights including Vladmal Prime, Estrode and Inquisitor Garau were revised dramatically. Other fights were restored to their original glory and then some. All were fitted with some new mechanic, or aspects that were less popular (like the upper floor of Matron) were reimagined. With the help of the community we transformed Hammerknell, while preserving the spirit of what players loved most about it. We’ve also learned some very useful insights about what makes HK special that we’re carrying into the designs for our next raid, which is already under construction.

We aren’t stopping at good with Hammerknell, though. We want to ensure Hammerknell lives up to both its legacy and its potential – so we will continue to test and improve right up until the week before launch. If you’d like to join in testing the new content, log on to PTS with a raid of lv65 friends and head to Hammerknell, where you’ll find portals leading to every boss in the dungeon and access to the raid testing gear in the ‘Dummy Foundry’ off Mr. Raidmare (the giant, misunderstood but very helpful village devouring worm). We look forward to hearing your feedback and hope that you are as excited as we are for the reawakening of Hammerknell!