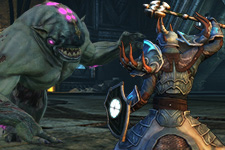 Hewn limbs rustle in the depths of the Delve. Tongues twitch and eyes search for the shapes of fallen bodies. They roll and cling and snap one to the next, cohering into souls you thought long dispatched: Murdantix, Zilas, Grugonim, Molinar – the list goes on as the full host of Akylios’s horrors rise from the grave. This is happening. This is Hammerknell. And this time everyone will meet its horrors face to face.

RIFT 3.2: Echoes of Madness has arrived with the blood-curdling promise of Hammerknell-for-all. Our rebuilt 20-player raid leads the way, along with re-tuned and reimagined incarnations of its legendary foes. Instant Adventures will expand the fight into (and beyond) the home of Dwarves, as do Tier 6 Nightmare Rifts, huge upgrades to the Wardrobe system, and more!

While the Ascended scored tactical victories against his forces in the Plane of Water, Lord Arak searched for nightmares they truly feared – and found them in the haunted halls of the Dwarves. Now, he’s used the plane’s power to bring Akylios and his army back to life: an army that’s ready to devour minds across Telara. Gather your max-level allies and dive into one of the best-loved raids in RIFT. The spirit, scale, and atmosphere remain, but the difficulty has soared to level 65!

In the weeks following the raid debut, new Instant Adventures will open the halls of Hammerknell to all players at the push of a button. Battle through interconnected quests that lead you on a tour of the fortress and pit you against its greatest foes.

Of course, the fun doesn’t end in the Delve: improvements to all Instant Adventures are now live, including better scaling and pacing, fewer Zone Event distractions, Notoriety token rewards you can redeem with any faction, Featured Adventure queues, and more.

A massive upgrade to our Wardrobe System will save the appearance of all of the items you acquire and let you use them whenever you like in a range of personal styles and looks (including items you earned for Achievements but have since discarded!). Additional updates are planned for the future, adding Wardrobe Favorites, Sets, Linking, Previewing, and more.

Are you a nightmare hunter of the highest order? Try your hand at new Tier 6 Nightmare Rifts that up the ante with endless waves of danger (and rewards). If you’re looking for more leisurely alternatives, try scaring up new Twisted Artifacts in the Plane of Water or fishing your way through Nightmare Tide with new and revamped poles, lures, and quests plus new fishing audio, “grey level” skill-ups, and the return of the Fishing Derby with new rewards.