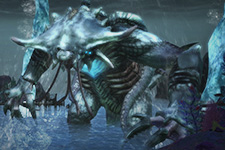 The island of Tyrant’s Throne is a mysterious disc of earth and iron adrift in the Dreaming Sea. Lost in open water and shrouded by storms, it has served as a refuge for Crucia while she recovers from her defeat in Frozen Tempest. Now, while Ascended battle akvan for control of the plane, Crucia’s army readies metal monstrosities for a new planar war…. The journey into RIFT 3.1 Storm at Sea is nearly at hand. On January 28, players will make landfall at the harbor of Tyrant’s Throne – just in time for titanic zone events that bring ancient akvan lumbering out of the abyss! Ascended will have one week to wipe them from the island before the opening of Tyrant’s Forge, a new 20-player raid pitting the strongest Guardians and Defiant against the Dragon Queen of Air.

Tyrant’s Throne is not for the faint of heart. The Storm Legion lays in waiting, tuning the island’s defenses and wrangling the Yrlwalach, a cosmic akvan echoing through time and space. When your arrival disrupts Crucia’s hold over the akvan, it will be free to lay waste to the island. Stopping the Yrlwalach’s charge will take you to the very edge of sanity … and a bit beyond.

The race to stop Crucia begins under Tyrant’s Forge, the citadel where she oversees the creation of a mechanical dragon form that – if completed – will let her reign with impunity over the planes. You must first battle past the tortured Johan to gain access to Crucia’s lair. Inside, the Legion will rally to their leader’s defense in the scrapyard home of Pumpkin, a nearly impervious deep-sea mech. Survive the encounter to face off with Crucia herself as herself … if you arrive in time!

Chronicle: The Rhen of Fate

Wondering what would become of Finric had you never stepped foot in the planes? Relive the action of the first Nightmare Tide Sliver in a new 2-player Rhen of Fate Chronicle.

From beyond the veil of sanity comes a new Raid Rift: “The Darkest Magic.” Nightmare beings both evil and strange are tearing their way into Draumheim, and only you can stop the madness before it takes over.

Secretive new Minions are ready to put wily collectors to the test, while new capes debut for all. For more on RIFT 3.1: Storm at Sea, follow the Forums and Community Blog in the weeks to come!