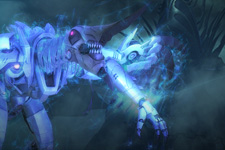 A maelstrom of Ascended sweep toward Tyrant’s Throne and war with the Crucia’s war-forged Legion – RIFT 3.1: Storm at Sea is live! Log in today and travel to the Storm Legion’s island refuge off the coast of Goboro Reef. Steel your mind for battles against akvan demigods and test your mettle with a new spine-tingling Nightmare Raid Rift and Rhen of Fate Chronicle.

Quest across the island, discover new capes and minions, master Dusk, Dust, and Steam planar attunements, and prepare to face Crucia herself in the heart of Tyrant’s Forge, a new 20-player raid debuting next week.