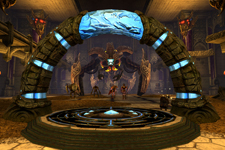 Return to Deepstrike has been a several month long journey from conception to today, when I’m excited for it to go live for everyone to play. The idea began a few months ago, when Daglar and I were talking about pre-Storm Legion expert dungeons as we lamented that most of them were sitting dormant. We had a ton of new players entering the world with the free-to-play conversion but most of those players were passing these dungeons by as they moved on to Cape Jule or Pelladane in Storm Legion. These players were missing the spike room in King’s Breach, the cavern in Iron Tombs and the titan area of Deepstrike Mines – and that simply would not do. The solution was obvious: revamp a classic expert for level 60. That left only one final question: which dungeon to pick? The team chose Iron Tombs: it’s a classic dungeon crawl with great encounter spaces. The next morning as I was driving into the office, I questioned our choice. Would you guys pick Iron Tombs if given the chance? When I got in, I pinged Daglar. I asked if we could put the vote to you, the players. This post was the result.

The results were pretty tight between Abyssal Precipice and Deepstrike Mines. As I watched all of the votes pour in for AP, I couldn’t help but think “Didn’t you guys farm that to death at 50? Why would you want to ever set foot in that again?” In the end, DSM pulled away with 112 more votes. The surprising factoid out of the poll is that Iron Tomb was #3. A very distant #3 as AP and DSM constituted a collective 61% of the votes. Polls closed after a week and DSM was declared the winner.

And so began my Return to Deepstrike. My first concern with the dungeon is that it was too long to meet the current standards of Storm Legion experts. If we kept the map as is, it would be a 2 hour dungeon crawl. In the revamp, I started the dungeon at the Dig Site. This gives us the ability to show players parts of the map they may have never seen with a new twist. Deepstrike Halls has always been the most interesting part of this dungeon for me – I mean… titans sprawled out on their huge beds snoozing away the centuries while their automations watch over them. It’s a classic dungeon crawl as well. Distinct rooms. Interesting encounter spaces. What more could you ask for?

With that decision made, the next step was to determine what is the story that we want to tell with this dungeon. Why are players coming back to this area? What has changed? Who or what will they encounter while exploring this place? I was fairly confident that the story should be about the titans awakening from their slumber. Titans are just really cool enemies with a deep backstory. I pulled Captain Cursor into a room and we started to bounce ideas off of each other. He suggested that our bad guy be Ionraic from Dendrome since he’s a jerk. You go through all of that trouble for him to get the trinket that he wants in exchange for the dragon eggs and he just pounds them into dust after making the trade. Class A jerk. From there, the rest of the pieces kinda fell into place. What his motivation is for being there in Deepstrike Halls, why he has awoken his titan brothers, and most importantly, why the players are there.

Return to Deepstrike has been an amazing journey. I hope you enjoy exploring the dungeon as much as I did while revamping it. Andy Kirton Senior Game Designer