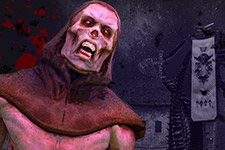 Orphiel Farwind has opened a portal to the past. Uncover the key to ending his reign in the second act of The Nightmare Saga – now live!

In Part 2 of the Nightmare Saga, you’ll follow Orphiel on a journey through pivotal moments in Telaran history, from the Mathosian civil war to the fall of Port Scion, in an attempt to unveil the mysteries behind Lord Arak’s origins. If he is indeed the Nightmare, who is the dreamer?

Embark upon this tour through time to receive awesome rewards, including a Smooth Guffin Pebble to summon 3 ferocious Guffins to fight by your side and your very own (tradeable!) Orphiel Farwind Dimension NPC with a habit of opening portals to unforeseen places.

Shake the fog of nightmares from your shoulders, Ascended. Let not the river of innocent blood in your wake be the legacy that Lord Arak forces upon you. You will have your vengeance in time!