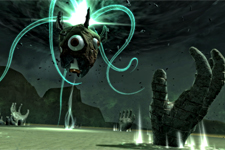 When you sleep in Telara, the figures of your dreams are born in the Plane of Water. Unfortunately, your nightmares are born, too – and they blame YOU for their terrifying forms and thirst for murder. Read on to prepare for the massive tide of ghosts, terrors, demons, beasts, and dragons coming to settle the score in RIFT 3.0’s new Nightmare Rifts!

No zone is safe from the upcoming onslaught. Starting Oct. 8, you’ll see Tier 1 Nightmare Rifts opening from Silverwood and Freemarch to the shores of Tarken Glacier, and there is literally no end to the number of new horrors they’ll spew into the world. As long as you continue to clear the rifts’ timed stages, new waves of invaders will appear.

Of course, each successive stage will be more difficult than the last. You’ll face tougher enemies, or a colossal boss, or more complicated mechanics, or a hard(er) time limit (or all of the above) as you progress deeper into your personal nightmare!

As you cleave and cast your way through wave after wave, you’ll rake in new loot, Achievements, chest drops, and access to higher-tier Nightmare Rifts.

Unlocking Tiers 3-5 is a serious accomplishment that will take a combination of gear, skill, power-ups, and the right companions, but the potential rewards make it very worth your while. High-end nightmare hunting pays off with special Nightmare Caches and end-game Essences in addition to the boss loot and Ghar faction Notoriety you’ll collect along the way!

Bridging the Rift: Oculus’ Answer to Virtual Reality– With their clunky designs and nauseating displays, truly immersive virtual reality devices used to be …