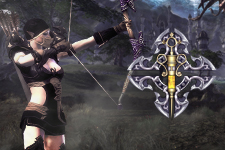 The first new Souls since STORM LEGION make landfall in RIFT 2.7, an update with expansion-level features that (among other things) enable characters from each Calling to play every role in the game.

Read on to meet the Physician, a main-healing Soul for Rogues, and stay tuned for a first look at the new Mage!

Physicians hail from an era beyond the gods where Clerics’ prayers lay fallow and Rogues heal armies of Ascended across the planes. Trained as alchemical archers, they use ranged abilities to heal and shield friends in need.

“Alone in the cosmos”

Murmond gazed over the prow of the bone ark, searching the starry expanse ahead. He wondered how far they were from Telara and how much time they’d lost. Adrift on the Soulstream, there was no dawn, no dusk, no spring, no fall. Just the remains of the last ships of the last survivors of the last world, riding the winds of cosmic chance into an endless dark.

Their voyage had started well enough, buoyed by determination, propelled by the current of souls rushing toward the Plane of Death. Then the waves came. At first, Murmond wrote them off as spikes in the stream, fallout from major battles or planar wars. But they kept coming, swelling in number and intensity until torrents of roiling souls heaved entire ships one into the next.

While the fleet eventually recovered, the Soulstream was lost. It had ripped in two, launching a towering crest of spirits toward the horizon. Worse, it had left Murmond’s expedition marooned on a whirling gyre of aimless dead.

The ex-cleric scratched idly at the railing while his mind wandered over the past and his heart longed for the company of his deity. “They’re not dead,” he whispered fervently. “They’re just too far away. The Akvan have stretched the cosmos into strange dimensions.”

Murmond was shaken out of reflection by a tentacle arcing out of the darkness and spiraling overhead. More tentacles followed, knifing into vessels across the flotilla. Thousands of amphibious creatures crawled along the appendages at speeds impossible in this dimension. “Shahgi!” the cry came at once from many parts of the wreckage.

Murmond drew his mace and shield, said a quick prayer he knew the gods couldn’t hear, and leaped onto a tentacle that had burst through the hull of his vessel. He slammed into its front line of shahgi, knocking them off their perch. His mace swung violently, caving in slick, slime-covered skulls. But there were too many raiders. They surrounded the elf and flayed open his armor. His wounds blistered and soured, infected by the displaced timeline surrounding minions of the ancient Akvan.

Then the high-pitched note of an arrow in flight sang out, and a needle plunged into his back. Murmond cried out in agony – until he felt the familiar tingling sensation of a healing potion knitting his wounds together. He turned and saw its source, a lithe archer leaping from perch to perch among the wreckage of the arks, letting loose arrow after arrow of alchemical hope.

It was Kiera, the ark’s Physician, cutting down shahgi and healing Elves as fast as she could draw and let fly. He smiled. She’d always been a capable herbalist and stunning shot. After the tentacles began to hunt the fleet, Kiera had combined the skills, pouring timely salves into allied fighters with barrages of needle-tipped arrows.

The rest of the Elven survivors rallied behind Murmond, whose back resembled a pincushion of alchemical treatments: a massive therapy for acid the shahgi had spit in his face, an active treatment for the bone scimitar lodged in his kidney, a casual treatment for claw swipes, and a maintenance pot for good measure. His assembled force repelled the shahgi and slashed the Akvan’s tentacle loose of the ship.

As it flailed into the darkness, Murmond heard a frantic cry from above.  A group of shahgi had reached Kiera’s position. He watched as the Physician produced a shot of adrenaline, stabbed herself in the leg, and dipped into a spin. A volley of arrows followed, each catching an amphibian in the throat. Not long after, the rest of the Akvan minions lay dead.

Murmond slumped onto his back while his body continued to mend. When Kiera appeared overhead, he looked at her with a mixture of gratitude and despair.

“We will find the lost goddess,” Kiera said, reading the elf’s expression. “And then undo this cosmic ending that fate has spun.” Kiera’s inventive nature is what had gotten them this far, but it was her pragmatism that really saw them through. “How can we not? There isn’t much of a cosmos left to search.”