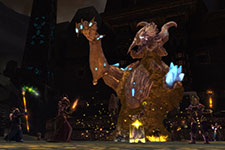 Ascended have ventured through time to bind Lord Greenscale and Akylios, but the Blood Storm threat remains!

The Binding of Laethys – now live – kicks off the second pair of Tier 3 raids, while the battle against Maelforge debuts next week. Can you fight past the fearsome Malaven and his crystalline allies to defeat the dragon god of Earth? Will you subjugate Maelforge before he recovers from injuries inflicted by Regulos himself?

Log in to RIFT and test yourself against one of the greatest threats Telara has ever faced!

Check out this demo of the Oculus Rift virtual reality headset used with new game, EVE: Valkyrie. Find out more about the EVE franchise from CCP’s David Reid…