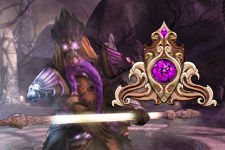 The first new Souls since STORM LEGION make landfall in RIFT 2.7, an update with expansion-level features that (among other things) enable characters from each Calling to play every role in the game.

Our Soul reveals conclude (for now!) with the Arbiter – a Mage tank who weaves wind, lightning, and ice into defensive abilities on par with the best in Telara.

Arbiters are mages who have studied spells of invulnerability to perfect the art of magical damage mitigation. Armed with the powers of Water and Air, they taunt and torment enemies with storms and brush off their attacks with shields of ice. Don’t be fooled by the cloth and wand – these mages stand toe-to-toe with Riftstalkers, Paladins, and Justicars on the front lines of battle.

Hylam watched the other masons pad toward the Athenaeum. When they reached its entrance, she vanished from her post and reappeared in their midst. She spoke softly while the group drew and poisoned an assortment of blades.

“Target Voradrin. This should be quick,” she whispered. “He’s a mage, after all.”

Hylam was right in one regard – Voradrin was a mage. As a young Dwarf, she had seen him reading the same books for days, scribbling notes, fiddling with a spell or two. Unfortunately for Hylam, she’d left to join the Abyssal before Voradrin’s … change.

It had happened in Hammerknell’s library, on ground not far from the current construction site. Voradrin had been alone as usual, muttering over the pages of a massive volume. “We are fools, blinded by our traditions,” he read. “We hide behind warriors when our best protection is knowledge. The knowledge of magic.”

The longer Voradrin spent with the tome’s runic equations, the more animated he became. He traced quick outlines in the air that flashed with an ancient energy. Trembling with excitement, he set off with an arm full of books and, as he rounded the library’s stairs, fell head-first over a panting corgi.

Voradrin picked himself up and blinked at the dog. “What are you doing here, boy?” he asked, scratching its ears. “Dogs aren’t allowed—“.

Before Voradrin could finish his thought, the corgi had doubled in size. It kept growing until it towered over the mage, and when it spoke, the library shuttered.

“Voradrin of the Runemasters,” bellowed the manifestation. “Safeguard the knowledge of my people. It must survive the troubles to come.”

“As you will, mighty Bahralt.” Voradrin averted his eyes as he spoke. He knew what happened to mortals who gazed upon the divine. “Though here in the heart of Hammerknell, what could….”

Voradrin realized the god had vanished. So had the corgi. In their place lay a scattered pile of his papers and tomes. “I suppose if Bahralt wants the library to stand the test of time, the librarian should as well.”

Voradrin hurried back to his work: studies that would give rise the order of Arbiters, mages who master spells of arcane might and protection, and the creation of the fortified Athenaeum to keep the ancient knowledge safe.

To her credit, Hylam executed the surprise attack flawlessly. Her assassins donned masks of the Abyssal and rushed the old Arbiter before his attending mages had a chance to react.

“Hammerknell will fall,” she whispered as she plunged her dagger into his robes. “And your knowledge will be forgotten.”

Hylam was shocked to find her weapon warped and covered with frost. She drew a second and lunged again, but the mage tossed her aside with a gust of wind. Another assailant brought his club crashing into the Arbiter’s skull. The cudgel’s wood shattered on contact, and Voradrin countered with a blast from his staff.

“This is fine sport,” the Arbiter called to his colleagues in the chamber.

Hylam saw the odds turn against them. “Change of plans. Kill the help!” she directed.

“No,” Voradrin commanded. There was old magic in his voice. “You will face only me. I’ve spent my life building this Athenaeum to protect the knowledge of the ancients. Who are you to tear it down?”

The Abyssal assassins struggled against the mage’s summons, but swirling winds pulled them toward the Arbiter. Worse, their attacks bounced at angles off the mage, who had turned as cold and solid as a block of ice. One by one, they fell before the magic bolts of the other runemasters.

After the battle, Aleksei, the library’s Chloromancer, was the first to speak.

“How will we finish the Athenaeum without the masons?”

“Knowledge is the only tool we need,” replied Voradrin. “The knowledge of magic.”