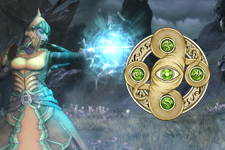 The first new Souls since STORM LEGION make landfall in RIFT 2.7, an update with expansion-level features that (among other things) enable characters from each Calling to play every role in the game!

Jump below for a first look at the Oracle, our support specialist for Clerics, and check back next week for the Rogue and Mage reveals ahead of the Souls’ PTS debut. (Miss the Warrior reveal? You can find it here!)

Oracles arrive from a dark future where their mastery-level support skills have forestalled the annihilation of Telara. Gifted with powers of Water and Death, these versatile casters can lift entire raids to triumph with a repertoire of powerful boons, shields, heals, buffs, and curses. As a group member, they’re indispensable. As an enemy, they’re impossible to ignore.

Toothbreak’s cheeks blanched light-green as he focused through the eyepiece of his spyglass. The last of his army was scattering like insects under the unstoppable assault of the Tower, one of the Tenebrean constructs that had laid waste to Telara. Its spidery limbs scissored through Toothbreak’s soldiers while launching lightning in wild arcs toward the ramparts of his planar keep. Only the silver dragon Tasuil, now gravely injured, had held the construct back this long.

“Bloodrot!” he cursed as a turret exploded nearby, sending his telescope tumbling toward the singed crags below. “Bile, puke, puke, bloody hand!” The general stamped toward his men on the inner wall.

“Go! Get out there! What are you waiting for? There will be no next battle!” He kept shouting as he passed his remaining forces, a motley assortment of creatures from the united planes. All were injured in some way: bedraggled dwarves, maimed ogres, burnt satyrs, spooked Bahmi, grounded harpies, and a skelf on the verge of drying.

Toothbreak paused and inspected the aquatic warrior. He was a grand specimen whose clawed arms, bladed tail, and impaling spines were enormous even by skelf standards. Enormous but dehydrated, thought Toothbreak. He took aim for the warrior’s face and spat with all his might.

“Thank you, general.” The huge creature perked up and smiled around a mouth full of razor-sharp teeth, saluting his diminutive commander for the gift of moisture.

Toothbreak nodded to the warrior and marched on, barking encouragements all the way to the keep’s inner temple. There he found the Divine Council, huddled together around Tasuil, trying to explain how this catastrophe was really the plan of their long-dead gods. Were it not for their healing, Toothbreak would have used the clerics for trebuchet ammunition long ago.

At least, all save one.

Syntyche the Oracle was the last Kelari on Telara. She spoke only in truths, and her word was a tangible, dangerous thing. Toothbreak had seen her kill with an utterance, and her chants were known to lead entire armies back from the brink of destruction. At the moment, she was communing with the dragon.

“The Tower has broken through.” Toothbreak spoke plainly but with urgency. “You need to fight one more battle before you abandon us.”

Syntyche finished whispering with Tasuil, then stood up and approached the goblin. “I agree. We need the construct’s energy to send me back.” She stopped and put her hand gently on the Toothbreak’s shoulder. “And I’m not abandoning you. I’m correcting a mistake. We’ve done this before… “.

“And millions of my people died.” Toothbreak frowned. “If this foolhardy plan succeeds, and you meet me again, will we be enemies?”

“That is up to the goblin you once were,” said Syntyche.

The general grinned. “I’ve always wondered what your curses feel like.”

The Oracle returned his smile, then turned and waved for Toothbreak to follow. Together, they found his reserve guard battling the construct inside the keep’s wall. With a word, Syntyche placed a seal of protection on the Tower, but it was not the enemy that benefited from her magic. As the army of the alliance fell upon the machine, they were shielded with her faith and infused with power.

She spoke again, and the Tower’s defenses began to corrode. Before long, the general’s smallest boglings were striking with the power of dragons. The Tower shuddered from the onslaught, and the Oracle chanted on, weaving through syllables last heard on the icy edge of the cosmos when the gods first appeared. The army of the alliance surged forward, and the Tower toppled.

The general’s technicians hurried to collect a strange energy that poured out of the dying Tenebrean and shuttle it to Orphiel’s Failsafe device. The Oracle and goblin made their way to the machine, and the surviving soldiers parted in reverence as they passed. If Syntyche was successful, the friendship and unity they had forged in battle against the outsiders would be gone. The old hatred and conflicts would rage once more … but at least the planes would survive.

Syntyche paused before the Failsafe while its coils spurred to life. “How many times have you been used?” she asked. “How many mistakes have been corrected?” The device pulsed, signaling a full charge. She pulled Toothbreak into a tight embrace, then stepped into the glowing light – and everything changed.