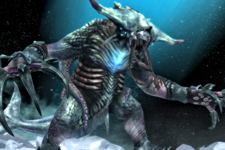 The battle for the Plane of Water reaches dizzying heights on the frigid crown of Mount Sharax, the first 20-player Nightmare Tide™ raid. Lead the ascent on a spire thrust beyond the threshold of the known – but prepare for a steep challenge. Mount Sharax is ruled by Ice Giants who have tired of their subservience to the gods, and their champions – and the Akvan they command – are the deadliest adversaries in RIFT!

BEYOND LIFE … AND DEATH

Mount Sharax exists beyond the edge of the Plane of Water, in a realm where life and death have come unhinged. As you launch your invasion, a familiar foe is summoned to block your path: Bulf, Herald of the End. The Skelf warrior has been chosen by a dark god to end your threat no matter the cost.

GUARDIAN OF THE GATE

The Ice Giant Jinoscoth guards Mount Sharax’s lone ascent. Strongest of the giants’ Warmasters, he longs for a chance to smash, freeze, and scatter invading Ascended across the cosmic glacier with shards of ice and freezing Sharax winds. Defeating Jinoscoth requires masterful coordination, execution, and no small amount of pain.

Two more Warmasters, Ilrath and Shaddoth, have their own plans to end your assault on Sharax. If you defeat the mighty Jinoscoth, they will summon the Akvan Izkinra and bind it to the form of an Ice Dragon hewn from the glacier itself. The massive ballistae they guard could help ground the beast, but its breath, hail, and freezing storms will make it difficult to find purchase on the cliff….

NIGHTMARE ON THE MOUNTAIN

You’ve seen the Yrlwalach before, fleetingly, peeking out from behind the thrashing tentacle at the center of a Water rift. Its full, hideous form is a secret well-kept by Threngar, leader of the Sharax. It’s also one he’s ready to share if your war party reaches the glacial summit. Avert your eyes from the nightmare’s true, horrific *face lest you be driven insane!

Massive and murderous, Threngar toils to unmake creation in the void beyond Mount Sharax. He wields old magic – raw, dark energy with the power to draw planes together and summon a world-eating horror waiting on the other side.

New Videos Every Week! Please Subscribe! This Assassin Guide has been reviewed and approved by Ecru, a well-known and skilled rogue livestreamer. Link to the…