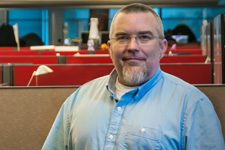 With the release of Nightmare Tide, RIFT has entered a great new era. An era with all-new systems like Minions, revamps to old systems like Mentoring with our side kicking system, a slew of new content, new challenges in the form of Nightmare Rifts, and of course new levels to gain. The world has been filled with players leveling, exploring, pushing back planar invaders, and seeking to slay colossi during massive zone events.

We’ve been absolutely thrilled with the feedback we’ve received as you experience all that Nightmare Tide has to offer. The support that you have shown RIFT has been inspiring. Nightmare Tide is the best version of RIFT to date, and the team will continue to improve, tweak, and expand the game – based on your piles of feedback – in both weekly hot fixes and major updates.

I just recently celebrated my fifth year working on RIFT. My position has changed considerably over the years, and every new stage has offered new challenges and problems to solve. Now, as the Executive Producer for RIFT, I have new responsibilities to deal with on a day-to-day basis. As such, I’m happy to announce the promotion of Chris “Archonix” Junior to the position of RIFT Game Director.

As the Game Director, Chris will be working with the team and coordinating the day-to-day running of RIFT, interfacing with the player base, and acting on all of the feedback that gets sent in. Chris is a seasoned game developer who has been with RIFT for over five years. He has witnessed the evolution of RIFT first-hand and helped guide many of our decisions along the way.

He has also lurked in the shadows far too long! I’m happy to (finally) thrust him into the spotlight here to tell you guys about himself and some of the things the team has in store for you. You’re in good hands.

Hey there, folks! My name is Christopher Junior, and I’ve been working on MMOs for the better part of a decade, and playing them far longer than that!

In my time working on MMOs, I’ve focused mostly on the systems end of game design, working on things like progression, reward mechanics, how game systems interact with the game content on one side and our players on the other, and occasionally dabbling in entertaining ways to let you all kill each other.

For the past year and half I’ve been heavily involved with both the game and business parts of RIFT, also pitching in on Trion’s products as a whole. But that’s enough about me. I bet you care more about what’s in store for the future of RIFT.

Since the release of Nightmare Tide, the team’s been working hard to solidify our major milestones for the future. While I’m not ready to share all of our plans, I’m happy to give you all a bit of a sneak peak for what’s coming in the short term.

We’ll be kicking off another seasonal event with Fae Yule starting next week, complete with all the rewards and activities you’ve come to love. (We even found some sweaters that would make Grandma proud!)

Shortly after the start of the New Year we’ll be launching our first huge update to Nightmare Tide, tentatively titled “Storm at Sea.”  Included is Tyrant’s Throne, lost island of the dreaming sea, an open-world area under the control of a new menace.

The island will be host to new quests and an extension of our first tier of raiding within the Tyrant’s Forge. The update will include additional zone events, a new Chronicle, and a Raid Rift and thrown in for good measure!

But what about Minions???

I’m glad you asked!  We’ve been so overwhelmed by the positive response we’ve seen from the Minion system, that we’re forcing the team responsible for it to stop playing and make it even better.

Currently they’re implementing the ability to “shuffle” unwanted adventures as well as ways to boost/refill stamina for your favorite minions – the ones who are so exhausted from adventuring!

It’s an exciting time here at Trion, and I look forward to spending more time on the forums and live streams interacting with all of you in the months to come. On behalf of all of us on the team: Thank you very much for being a part of RIFT. Here’s to a great 2015 and beyond!