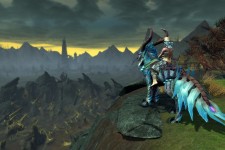 Mayhem is spreading! Today through Monday, the event has moved to Goamwood and Stonefield.

Telarans who help battle the forces invading the world have a chance at unique and rare loot. Read on for a list of rare loot and our next “Memories During Mayhem” piece, this time from Dead Simon.

It was like being at Wal-Mart at 11:59PM just before Black Friday. I knew it was going to be crazy because of how the betas had gone. I knew there would be a lot of players but I still was unprepared for just how many. The servers unlocked and the flood gates opened! Telara, which up until a few moments ago had been left to the ravages of the Planes, was now inundated with eager Ascended itching to take the fight to the Dragons. It was an exciting time; Zone Events were firing in the low level zones at a furious rate as that is where all the players were. I still remember riding from objective to objective with 100’s of other players all atop their two headed turtle mounts, a special edition perk that it seemed everyone had opted for. It was quite simply exhilarating. These days that feeling can still be achieved but it has up until recently been confined to the high level end-game zone, as that is where the majority of the players are now. Even though there seem to be new people everywhere in every Zone they are not in the lower level zones in the numbers they were in the first months after launch. I personally have really been enjoying the Mayhem events that we have been running in these zones, as it has brought back some of that old feeling, as higher level players are encouraged to come and visit zones they have not been in for a very long time. I am really looking forward to tweaking and polishing these events to capture that feeling even better, but right now I need to get back to Freemarch I hear Regulos is making another play for the Scarred Mire.

Part 151 of my ‘Let’s Play’ gameplay and commentary in the MMO, Rift, by Trion. In this episode we join Seraphis and Tallahassee, as we head back inside the …