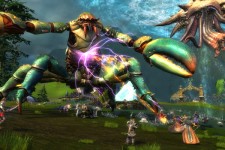 Mayhem has descended upon Mathosia!

The time has come: massive planar invasions are now happening in Scarlet Gorge, Scarwood Reach, and Moonshade Highlands. Log in now to defend against the onslaught.

The event runs from August 21st through September 4th and the rewards include bonus planar currency, bonus loot, and a new achievement!

The aforementioned goodies are not the only rewards you can get during this event: you’ll also find special items dropping out of zone events:

Whether you are new to Telara or a longtime player, there will be mayhem for all: RIFT Veterans can mentor down and join fellow Ascended in defending for special loot!