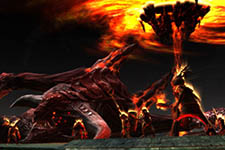 Maelforge is dead, and Lady Glasya, commander of the Bloodfire Army, has been exiled from the Plane of Fire. Now she sets sail for Telara with a power so great – and so familiar – that Crucia herself prepares for war.

Preview the Bloodfire invasion now live in RIFT, and read on to meet their infernal leader!

The Heart of the Matter

Lady Glasya looked down at the goblin. He was small even for a Gedlo, with a knit cap that helped her tell him apart and a cup of sacrificial blood. She lingered before accepting the offering, enjoying the tremble of his outstretched arms.

This one had proven useful for the menial work required by her father. Together, they directed the collection of the Condemned: mortal souls that had fallen to the scorched fields of the Plane of Fire. Glasya bound the souls’ remade bodies and split them open; the more each one suffered, the more power her Blood Magic could siphon and store.

Of course the fruit of this labor was not hers to keep. It was shared according to feudal obligations among the leaders of the Infernal Court. It’s all so civilized, Glasya thought, as she poured the offering on an enchanted altar. The blood sizzled on the hot stone, and she drunk in its intoxicating vapors.

“My lady?” the goblin squeaked. Glasya startled out of reflection, then looked over the point of his diminutive finger at a fireball tearing out of the clouds. It shook the atmosphere as it changed shape, and her mouth fell open as the winged form of Maelforge emerged from its wake of flame.

“The dragon is slain and his soul returned,” Glasya cried. She reached for her amulet of office, an artifact that channeled power from her sacrifices to her father’s keep. With a single motion, she ripped it from her chest and buried it in the goblin’s neck. “That will be the last tithe I pay,” she said as her victim collapsed across the altar.

Glasya spread her dark wings and took flight toward the colossal beast. She arced over a swarm of lesser devils, landed on the dragon’s chest, and turned to face her competition: Elder demons, Wanton warriors, and condemned souls all rushed to claim the dragon’s soul.

She felt more alive than she had in years as she tore them apart. “The heart is mine,” she shouted while hurling arcane bolts. “And with it I shall end this loathsome bondage!”

Unlike much of the burned and bloody plane it overlooked, the throne room of the Platinum Keep was typically pristine. It called back to an earlier time, when the Lord of Fire had lived a much nobler existence. Today, its smooth marble was smeared with the gore of Lady Glasya.

She had claimed the soul of Maelforge and gorged on his reformed heart. She had raised an army and led a rebellion against her father’s court. She had been winning – until she was betrayed and captured by her closest vassals.

Now she struggled under chains that bore her true name. It took all of her immense strength to look up at her gathered captors. “End it,” Glasya hissed. “Take my heart. Perform the ritual of Blood.”

“Poor, defeated daughter of flame,” her father replied, kneeling before her. Glasya felt the heat of his breath as he whispered into her ear. “I’m so proud of you. None of your siblings would dare defy me.” Then he straightened and returned to his throne, the affected kindness dropped from his voice.

“Lady Glasya Alaviax, Duchess of the Painfield, Protector of the Western Fall, and Admiral of the Molten Fleet, you are hereby stripped of all lands, titles, and honors.”

The Lord of Fire gestured to the attending demons. “Cast her into the wilds. If she is found within my realm again, rip her heart out and bleed its power into the dirt. I’ve had enough of the reign of dragons.”

This is my favorite reaction of the day.
Video Rating: 4 / 5