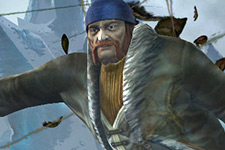 Once, Cosmologist Mann was the brightest scholar of planar phenomena in the universe – a leader among his peers. Nary a beam of light nor celestial body existed that he could not name. His curiosity knew no bounds, and yet, his gaze reached too far.

After discovering the Temple of Aia, he inspired the ire of the Goddess herself, and she filled his mind with visions of a life destroyed by mortals. Now, Mann schemes in the frigid depths of Tarken Glacier, driven by a mad desire to rewrite Telara’s cosmic history.

Relive the fight for the Glacier – and stop Mann from releasing Shigoroth upon the Dreaming Seas – in new Instant Adventures debuting with RIFT 3.3: Waking Nightmares. Prepare for harrowing battle in the coldest corners of Nightmare Tide, and reap the rewards of Mann’s research run amok!