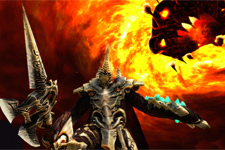 Today we’re excited to announce our third iteration of Mayhem in Mathosia. For this new event, we’re channeling the early days of RIFT with an eye at creating a frenetic, ever-changing experience that brings players together to fight foes on a massive scale.

Instead of an event that remains the same for several days, Mayhem in Mathosia will now travel through zones – each phase will last two days and carry unique objectives, achievements, and loot including Lavender Hellbug and Sapphire Ki Rin mounts, Hellbug companion pets, and more.

In the days to come, we’ll be doing two things: detailing more about each phase (and the awesome stuff you’ll be able to get for participating) and hearing from RIFT devs looking back on event design from launch to RIFT 2.4!

RIFT is an evolving game, and nothing represents this more than our event system. Since launch, we’ve created, scrapped, recreated, and held a wide variety of zone events and world events. Throughout, one thing’s been clear: the most successful events bring players together in great numbers to face colossal threats.

Whether it’s 200 players experiencing our first zone events during Beta, 400 players taking down bosses in Ember Isle, or 600 players fighting Volan, our events provide large-scale experiences you rarely have in other games. These open-world battles are not just huge – they let you harness the power of our Soul System, quickly changing spec to raid heal or to tank, to be the first one to charge into battle with planar hordes in front and a hundred players at your back.

While the shape and size of these events have evolved since launch, nothing really beat the feeling of experiencing them for the first time. I remember watching players come together in massive, concerted action – and while it put huge smiles on our faces, it also made a minor dent in our servers. We learned a lot from those initial events, and we’ve improved our serves, event design, and delivery to match.

You see these improvements in (and as the inspiration behind) our Mayhem events. Our game world has grown – which inevitably fragments the player base – so we’re giving players fun ways and incentives to rejoin friends in early zones and experience one of RIFT’s hallmark features as it was intended: planar foes as far as the eye can see, hundreds of players at your side, and your rift loot bag full to the brim.

The first two Mayhem events shifted the focus to some classic zones to bring both low-level and high-level players together. They succeeded in injecting life into these zones and reminding players what makes RIFT unique. And our upcoming event picks up right where they left off … while dramatically raising the stakes:

– October’s Mayhem in Mathosia will be a limited-duration World Event. During a week-long period, currency and reward bonuses will apply to a pair of zones just like the old Mayhem events, but the zone pairings will shift every two days.

– A new set of rewards, including new mounts, pets, achievements, titles, costume items, and consumables will be available with each phase. The World Event interface will also communicate when these phase changes occur and which rewards are currently featured.

– This event will introduce temporary quests that challenge players to complete objectives before the next phase change. The first twenty or so players (we’re still hammering out the final numbers) who complete these quests will also earn a special achievement and reward.

– A new, unique zone event will begin appearing in the final phase and offer new achievements, titles, and even more chances at Hellbug mounts and pets.

If all goes according to plan, we will continue to build on these events in the future, bringing new vitality and rewards to each of the classic zones. And, as always, we are open to feedback and ready to make rapid changes, so keep the comments coming.

Thanks for being a part of this and I’ll see you in-game!

Part 134 of my ‘Let’s Play’ gameplay and commentary in the new MMO, Rift, by Trion. In this episode we join Tallahassee as we make our way back to Iron Pine …
Video Rating: 4 / 5