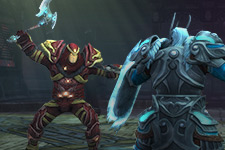 Be among the first to discover all the details of the new Warfront mode and map coming in RIFT: Into the Wilds! Read on for more information and join us for our live stream and playtest!

The ebb and flow of battle can be intense, and our newest addition to Warfronts captures this very spirit! In Assault Mode, you’ll play the part of Attacker or Defender while fighting through a series of objectives. Occupy strategic positions and force your way into your enemies’ inner sanctum, or drive your foes from your halls and secure your defenses against future assault. Once an assault is completed, you then switch roles and the battle resumes!

Assault on Bronze Tomb is an all-new Warfront Map and environment build specifically for Assault Mode. It features three distinct stages, brutal room-to-room combat, and a vast trove of ancient Brevanic technology, magic, and wealth. Mercenary companies from all over Telara and beyond rush to take control of this wondrous cache. You must fight through the Tomb to take your prize, but will you have the strength defend your new wealth?

Each team will attack and defend the strategic capture points throughout the Tomb. As one falls, more will open. Be wary of the Tomb’s devastating traps – or use them to your advantage to defeat your enemies!

Passage of the Fallen Heroes

Attackers and Defenders first clash amid the Tomb’s outer defenses, surging back and forth using jump pads to propel themselves into the fray. With two capture points to hold in order to secure the passage, teams must split their forces to retain control. Powerups and fiery traps add to the excitement in this entry point to the Tomb.

Tomb of the First Settlers

The action does not end once the Passage of the Fallen Heroes falls! Defenders can retreat to the Tomb of the First Settlers and rally around two additional control points in its central chamber. Opportunities for flanking maneuvers exist, but combatants will have to navigate amongst fiendish spike traps to take advantage of them.

Finally, a dedicated attacking force may be able to breach the innermost sanctum of the Bronze Tomb and penetrate the Treasure Vault itself. Before you can gather your riches, however, you’ll have to secure the vault from its tenacious defenders. With cannons, ice traps, and a fountain spewing venom, this is no easy feat! Canons can be activated by either side, so control of these mechanisms can be crucial in capturing this region’s sole control point!

Learn All About It

Want to learn more about Assault Mode and the Assault on Bronze Tomb? Check out our RIFT live stream on Friday, July 24 or join in on the playtest!

We’ll be previewing Assault Mode on Friday, July 24 at 3:30 PM Pacific on the Trion Worlds Twitch channel. Join us as we talk about the what, why, and how of Assault Mode, as well as observe a live test in progress. Host Eric “Ocho” Cleaver will be joined by Michael “Kerilar” Hansen, who will spill all sorts of interesting and fun details about the design.

Watching a livestream is exciting, but what could be more fun than being among the first to experience the thrill of Assault Mode? Playing it! Jump on the Public Test Shard this Friday, July 24 at 3:30 PM Pacific, and battle in full view of your fellow players watching. For more details on the playtest, visit the forums… if you dare!

So prepare yourself Telaran, the Assault on Bronze Tomb is coming with RIFT: Into the Wilds!