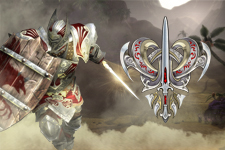 The first new Souls since STORM LEGION make landfall in RIFT 2.7, an update with expansion-level features that (among other things) enable characters from each Calling to play every role in the game! Stay tuned this week and next for previews of each new Soul ahead of their PTS debut, and read on to meet the Liberator, a Warrior making waves across Telara for his arcane rites of … healing?

Masters of metal and mending

Recently returned from the Plane of Earth, Liberators plunge into uncharted waters for the Warrior Calling: raid healing. They funnel restorative magic through magnetic fields to allies in need, specializing in high sustained HPS and group/AoE heals. If you see a Warrior gleefully flinging absorption shields to friends while hacking at foes, don’t worry—unless they’re not on your side.

“You Seem Broken, I Will Fix”

Marvar leaned on his staff as he limped back to the Fortress of Fallen Stars. Every step was agony. He tried to recite Nightfall mantras to take his mind off the pain, but all that came out was a hacking cough filled with blood. As he approached the Gates of Eternity, he winced, this time in annoyance. It’s just a portcullis, he thought. Not everything needs some fancy, mystical name. Wouldn’t “the exit” do just as well?

Marvar had hoped life would improve following the dragons’ defeat. No more rifts. No more monsters. Fewer people telling him to cheer up. Instead, the Ascended fell into fighting amongst themselves. Not over the old arguments – faith, reason, prophesy, free will – but a smaller, more difficult question. One that bothered the old mage even more than his injuries: What now?

Marvar snapped out of his mumbling reflection as the ground began to shake. The Gates of Eternity were opening with a thunderous roar.

“What now?” Marvar moaned before breaking into an ill-timed coughing fit. When he finally looked up, he found himself directly in front of the onrushing cavalry of the Ascended knights of the Raven. Heavy cavalry. Who promptly trampled him.

“You okay, Marvar?” The crumpled man tried to focus. Annoyingly bright eyes belonging to an annoyingly cheery voice floated somewhere above his face. Marvar whimpered. It was Ivan, the Dwarf sentry who wore the novelty horse head mask because he thought it was funny. It wasn’t. Marvar was very sure on this point.

“He looks hurt! Someone grab his legs!” To this, Marvar tried to protest. Couldn’t they see the horses had broken his back? Hoisting him up was worst thing they could do. “Help me carry him to the Liberator.” Marvar wanted to scream, but managed only a series of tortured gurgles as they carted him to the keep’s infirmary. A huge Bahmi perked up at his arrival.

“Hello! I’m Ganzorig,” said the healer as he scooped Marvar from the sentries. “You seem broken. I will fix.”

Ganzorig broke into a martial dance. He looked like an understudy at the Carnival, Marvar thought, and wondered if his Nightfall comrades-in-arms were subjecting him to another practical joke. They were never as sober as he thought they should be. “I should switch sides. Maybe the Dominion lot will take things more seriously.”

“Done warming up.” The sweaty Bahmi drew a two-handed sword. “Now we make feel better.” Ganzorig raised the impossibly large blade above Marvar and brought it down in a massive strike.

“Don’t kill me!” Marvar shouted through the pain that – suddenly – wasn’t there. Marvar sat up, confused. He felt better. Not just better than before he was beaten and trampled, but better than he had in years. “What did you do? You used no magic. You just swung your sword around a bit.”

“No more pain, yes? Is good. Is happy!” the Bahmi held out a muscled hand.

“But what did you do?” Marvar yelped as the healer lifted him from the bloody cot.

The alarm bell rang out. The keep was under attack. Ganzorig ran out of the room with a friendly wave of his mighty hand. “Must go! Is war! I fix everyone!”

Marvar followed after him. He actually had a spring in his step that has been missing for ages. This barmy Bahmi had stumbled upon something Marvar, in all his years of study, had never encountered. Ganzorig had been part of an expedition to the Plane of Earth, an expedition that was offered to Marvar, but one he turned down in favor of the comforting routines of his home. As Marvar caught up to the warrior, he had already added this expedition to the list of his lifelong regrets.

The Fortress of Fallen Stars was surrounded by a huge force of mounted Oathsworn. The entire army of the lion was shining in their resplendent armor and spotless white robes. They looked every bit the iconic heroes their propaganda painted them to be. Marvar hated each and every one of them.

Ganzorig stood atop the walls, posing with his sword, posturing, flinging it about like a child at play. But as the mage squinted, he could suddenly see what the warrior was doing. He had bound the trace of ley lines to his sword. The Bahmi manipulated them through sheer strength. Not strength of will, not through magical means. He just bent them with his muscles. Marvar was stunned.

The assassins who had climbed the wall to take out the Liberator were also stunned. Ganzorig folded and shook the magnetic fields surrounding his enemies until they were disoriented. The Bahmi warped them forcefully through the Oathsworn ranks, dispatching foes without laying a hand on their bodies. He flashed a smile at the cowering mage and turned to restore the Nightfall troops to health.

Marvar experienced a rare flash of admiration. “Can you teach me this art? I must understand it.”

Ganzorig smiled at him. “Oh, no! Too puny and weak.” Marvar’s heart sank. “Plus is for happiness. You are quite jerk.”

Marvar left for the Dominion the next day. And every time they lost a battle, he would remind them of
Community