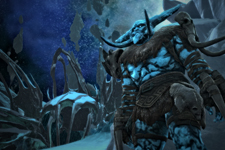 Far above the sand and fire of Goboro Reef, beyond the riots in the streets of Draumheim, the ancient bulk of Tarken Glacier reaches dizzyingly into the crown of the planar sky. It is legendary. It is behemoth. And its secrets will take you to the edge of the cosmos itself.

Your summit starts at Tarken Ascent, a famous climb from Draumheim into the great trench that trisects Tarken Glacier. After scaling its wall of ice, you’ll discover an open plateau holding frozen wastes, violent creatures, and two peoples in need: skelf pilgrims in search of their oceans of origin and the panicked researchers of Ghar Station Tau.

A band of free skelf pilgrims have made the ascent in search of their ancestors’ fabled sea. Its waters, now frozen inside the glacier, have preserved the coral that grew the Tree of Gyel. With the right leadership, these skelf will prove to be one of the few forces capable of withstanding the vicious Frost Giants who call Tarken home.

Facing annihilation by the Frost Giants and Shaghi, the skelf hope to raise an army in the pirate haven of Port Scuddra. This frozen harbor town is home to the few mercenary fleets still sailing the glacier: The Distant, an alliance of stranded mortals; The Unthralled, skelf whose masters have been lost at sea; and The Tormented, dream-born nightmares who threaten the entire realm.

Meanwhile, at the Ghar’s deep-ice research station Tau, scientists led by Cyberneticist Frekker and Cosmologist Mann have a different problem: an infection is claiming members of their camp. The lucky are going mad while other, less fortunate researchers are mutating into living horrors. You alone can solve their mysterious plight, but at what cost?

As you battle your way across the glacier, the crusaders of Octus Monastery, the last bastion of the Pelagic Order, look on from their perch overhead. The monks toil from this skybound temple to the wastes below, excavating eldritch words with the power to mend the oceans. Alas, each one that they recover weakens the prisons holding the Akvan at bay.

The gods themselves banished the Akvan to their prisons in the Plane of Water. Now, as Pelagic monks inadvertently weaken the seals keeping them in place, a lunatic mortal races to wake one of their oldest horrors from within. Descend into the frozen maw of Izbithu, consort of Matrodraum, and put an end to his plot before Izbithu wakes … and folds all of Tarken into the cosmic abyss.