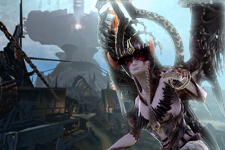 Our tour through Goboro Reef continues! Having settled the score with Grenk and her Akvan master in the Grotto of Horrors, you’ll head out of the gyre … and into the flames. Your charge: To defeat Lady Glasya at Gyel Fortress, the monolithic base of operations for the invading Bloodfire Army.

ORDER OF THE ONIR

Few are as dedicated to protecting the Plane of Water as the members of the Pelagic Order. Each is an Onir, a dream-being born in the imagination of a sleeping Telaran. And these particular Onir are a special breed: they hail from the dreams of crusaders sworn to protect the infinite seas.

But the sight of Glasya’s fire ships burning away the reef has caused a panic that even the Pelagic Order is hard-pressed to combat. You must seek out their leader, Quintarus, for aid in your assault on Gyel, and for an introduction to the long-lost Eth who can help you purge its halls.

The Ghar are descendants of ancient Eth explorers who were stranded on the Plane of Water. Cut off from Telara and running out of sourcestone, they did what the Eth do: survive, adapt, and turn impossible environments into marvels of invention.

They may look odd, wearing their dive helmets out of the water, and they may be helplessly addicted to Manugo. But Quintarus is right. The Ghar will pave your way to Gyel Fortress with an armory full of fire-quenching tech.

After navigating your way from the Rusted Harbor to the Tinder Box, you’ll arrive at the base of Gyel Fortress, a tower of splintered ships and smoldering metal. Its first guardian is a skelf named Seathe who, ever since he was a hatchling, has longed to serve the Tree of Gyel.

Unfortunately, seeing the tree burned alive has changed poor Seethe, who’s decided that the skelf, too, must be consumed with fire. And though he’s dying to prove his loyalty to Glasya, his newfound “Triferno” powers are slightly … raw.

Your clash with Seathe will draw the attention of Gyel’s second guardian, Kytus, and his pack of hounds. Sadly for Kytus, he’ll send his three favorite beasts to investigate. And if they don’t come bounding back, the whole of the Fortress won’t be enough to contain his rage.

Engaging Kytus in his twisted Houndry is necessary to progress, but it’s no walk in the park. The hound master’s stable of beasts will blanket the chamber in fire, and his massive Infernus Rex will be happy to steer you through it.

If you survive the Houndry’s fiery beasts and burning grenades, you can ascend to the core of the Fortress, a rusted crater where Admiral Nezavar’s flagship crashed into the heart of the reef.

Nezavar is a Razudan, a half-mortal, half-devil noble from the Plane of Fire who led Glasya’s fleet across the planes. Under different circumstances, he might join you in the fight against Glasya, whose invasion cost him dearly. But standing in (and haunted by) the wreckage of his beloved ships, Nezavar wants nothing more than vengeance on the allies of Water.

Lady Glasya commands the Bloodfire from a throne room above the Admiral’s flagship. She’s ruled over every aspect of the invasion from this roost of rust and cruelty. She’s also sliced, immolated, or vaporized all who stand in her way.

The key to her power is a set of mysterious Oculons, orbs filled with energy from another dimension. As long they’re in her possession, she can remake the entire plane in flames. With skill and tenacity, you’ll make sure she doesn’t.