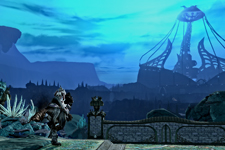 Are you easily spooked? Predisposed to paranoia? A known associate of the insane? If so, you’ll feel right at home with the dream-citizens of Draumheim, a vast, surreal city at the heart of the Plane of Water. Steel yourself for the uncanny delights (and outrageous dangers) that await from the back alleys of Bottomtown to the spire of Margle Palace.

Draumheim is the phantasmagorical home of the Onir, dream-beings born in the collective unconscious of sleeping Telarans. It is a bizarre city, vibrant and sprawling, where every whim is given life and every desire indulged. Some of its residents are well-adjusted souls who have lived happily under Kondraum, the zone’s sovereign leader. Others have been less fortunate.

BUMP IN THE NIGHT

For every happy Onir, there are countless nightmares darting through the skies, streets, and alleys of Draumheim. They are the people, beings, and beasts of darker dreams, the products of hidden thoughts, sordid interests, and murderous intent. Born misshapen and deranged, they have come to loathe their mortal creators and worship Lord Arak.

Arak’s horde of nightmares has started a revolution in Tribulation Square. They have kidnapped Kondraum, taken hold of the city center, and launched invasions into Telara – and all before the Ascended could react. As their victories mount, their ranks swell with creatures born in new nightmares – visions of Arak’s ruinous march across the planes.

FROM EACH DISTRICT, TRIBULATIONS

One at a time, the districts of Draumheim succumb to Arak’s violent forces. Fire demons have routed the inhabitants of Gauntlet Street. The posh have fled from Prosperity Heights and Polyp Promenade. In trendy Zeuxis, a new (and deadly) performance art is all the rage, while Choreburg is just raging with work. And then there’s Bottomtown, home to all-dreams romantic (and all unfit for print).

The battle for Draumheim reaches all the way to Margle Palace, where Princess Mala reigns in her father’s stead. Kondraum and Mala have put their trust in a dream-journalist named Fausta and the Mayor of Prop Noun, a knight with a strong incentive to quell the rebellion. Each eagerly awaits your arrival.

Complicating matters, Lord Arak himself is raising a host of special nightmares in the wastes south of the city. Drawing directly from the memories of the Ascended, he has stocked a twisted version of Port Scion with a menagerie of monstrous invaders. Some, like Demogos and the dragon gods, will be familiar. Others you must wait to dream!